Update below: Nothing says Happy Valentine's Day like a "You are racist" card!

And fortunately for officials at the Wells Fargo headquarters in St. Louis -- or more likely the security downstairs -- this is the exact message they will receive this afternoon as part of a protest staged by advocacy group Missourians Organizing for Reform and Empowerment, or MORE. The group, which does not shy away from confrontational protests, is hoping to draw some attention to the company's predatory lending and influence in local politics through today's action.

And in honor of February 14, MORE has chosen a "break-up" approach.

"It's not me, it's you," says Zach Chasnoff, an organizer, says.

Chasnoff tells us a group, including homeowners that have been hurt by Wells Fargo, will be meeting at 1 p.m. at the company's financial headquarters at 2801 Market Street to deliver a "breakup" letter, outlining why the citizens of St. Louis are not pleased with the corporation.

Part of the letter, full version below, says:

-We can't be in a relationship with someone who is abusive to members of my family. You have kicked our brothers and sisters out of their homes and show no signs of a willingness to correct your behavior.

-You have subverted my government. Your money and your power are now too deeply rooted in the politically system for us to feel comfortable staying with you. We need to know that our vote means something and that elected officials are beholden to you and not to you and your corporate friends.

"Here in St. Louis, they have a lot of control over our government," says Chasnoff, noting that MORE often tries to stage events with elected officials -- who typically back out, because they are intimidated by Wells Fargo. "Corporations have increasing power and louder voices than the rest of us average citizens." 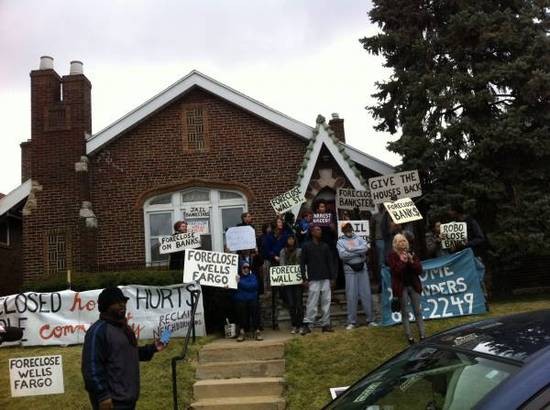 The group has been active over the last year in speaking out about the company, staging protests at the houses of those facing evictions.

"We really push...for divestment from the large banking institutions," he says. "We urge people to take a look at where their money is going and what the effect of that is."

In its letter, MORE highlights controversies relating to alleged racist lending practices of the company.

They've blown up a copy of the letter and will be delivering it in person.

"How far we get into the building, I don't know," Chasnoff says.

While we respect the rights of Americans to peacefully assemble, we believe it's important to share the facts about our company and its commitment to local communities and customers. Wells Fargo has a long history of responsible lending, and local community investment and involvement. Our priority is to provide customers and communities with the help they need by working to keep people in their homes, supporting the local community, and lending to businesses that are trying to grow and provide jobs.

Continue for the full letter.

We have been dating for 150 years and I think it's time that we had a serious talk. We are breaking up with you.

We would like to say that we had our good times but the truth is this has always been a one sided relationship with all of the benefits going to you.

We know that you will want an explanation as to why we are leaving you and we guess we owe you that much so here goes....

-You are racist. Memos that were leaked from you show that you targeted low income African Americans for predatory loans that you referred to as "ghetto loans" for "mud people".

-We can't be in a relationship with someone who is abusive to members of my family. You have kicked our brothers and sisters out of their homes and show no signs of a willingness to correct your behavior.

-You have subverted my government. Your money and your power are now too deeply rooted in the politically system for us to feel comfortable staying with you. We need to know that our vote means something and that elected officials are beholden to you and not to you and your corporate friends.

-You are dishonest. From robo-signing to a lack of good faith estimates, to the outright stealing of the American Dream from decent hard working homeowners you have shown yourself to be a liar and a thief.

-The $900,000 that you diverted from St. Louis Public School funding has broken my heart.

Maybe somewhere deep down you are still a good person but you need to do a lot of work on yourself and the way that you approach the world and community before we can ever reconsider getting back together with you.

With Deep Regret That We Stayed With You This Long,

The Citizens Of St. Louis MO.