Sue Gibson, HIV Patient in Castlewood Case: Other Patients May Have Been Denied Care 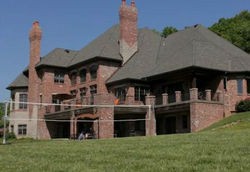 The Department of Justice agreed last week that a St. Louis eating disorder clinic discriminated against an HIV-positive woman by intentionally delaying her admittance and denying her treatment. Castlewood Treatment Center for Eating Disorders has been ordered to pay a $140,000 settlement, the second largest in the history of HIV-related discrimination cases.

The patient, Susan Gibson, a retired nurse living in mid-Missouri, spoke to Daily RFT about her health during the seven months of waiting to hear from the facility and her fear that other patients may have been discriminated against.

"It angers me they would treat people like that and for such a stupid reason," she says.

Gibson characterizes herself as the "classic anorexic preteen." She relapsed in her 30s and got herself into therapy. In 1989, she says she found out that she was HIV-positive. Living with the disease was a factor in her second relapse, she says, this one in 2010.

"Living with a chronic disease -- that is hard to deal with. I resorted to old coping mechanisms," she says.

Realizing she needed help, Gibson says she contacted Castlewood because it was closest to her home. She says she was told for months that her admittance was "imminent," but that there was an issue with payment and her insurance adjuster. The adjuster, however, told Gibson that she'd already approved payment. Castlewood staff continued to encourage Gibson to seek treatment elsewhere.

In the meantime, Gibson's health was deteriorating. At her worst, she says was limiting herself to fruit and bread, nothing cooked.

"I was not leaving the house very much," she recalls. "My anxiety and depression were heightened. I was under doctor's order not to walk more than a block [because of the risk of a heart attack]."

After months in limbo, Gibson says her first sign that something was amiss was a comment she heard while on a call with Castlewood staff.

"The intake person said one day, 'You know, Sue, I don't know why I didn't realize it, but we didn't admit a woman with hepatitis C last year. That makes me realize that you're not going to get in,'" Gibson recalls.

That moment stuck out in her mind when, seven months after her initial contact with Castlewood, she was told that she would not be admitted "due to her HIV" and because the facility does not "accept clients with high risk communicable diseases."

A friend put her in touch with the American Civil Liberties Union. After Castlewood offered Gibson treatment so long as she got her blood work done offsite, her attorneys filed a formal complaint with the Department of Justice.

Continue for more of our interview with Sue Gibson and response from Castlewood.

While the wheels of justice were slowly turning, Gibson finally sought treatment at a facility in California. She says that in her condition, the travel "was horrendous," but after a couple of months in treatment she was able to return home.

She says she was interviewed several times by the Department of Justice and says they seemed "very angry" about what had happened to her. Some of that emotion came through in the statement that was released along with the settlement announcement last week:

"Excluding a person from necessary medical treatment solely because of HIV is unconscionable," said Thomas E. Perez, Assistant Attorney General for the Civil Rights Division. "The Civil Rights Division takes HIV discrimination in any form seriously, and will not allow for the marginalization of those living with HIV."

Asked how she feels about the decision, Gibson says her thoughts return to the woman with hepatitis C who may have been denied treatment.

"It's a very, very serious condition. People shouldn't let it go on," she says. "I feel really bad for that person with hepatitis C that was turned away. I wish I could know if she got help."

(Daily RFT asked Castlewood if a patient was ever denied care because of Hepatitis C, and received this response: "Castlewood denies its staff made the alleged comment to Ms. Gibson, and any allegation that Castlewood discriminates in patient care is false.")

Today, Gibson is still living at home and maintaining her eating disorder, which she characterizes as "walking on a balance beam." She says she's happy with the DOJ settlement, but still shocked by the whole incident.

"It takes me by surprise that people involved in health care would be that ill informed in 2013. In the 80's and 90's I expected that but now?" she says. "People should know that HIV is a blood born illness. HIV and hep C can be prevented by using a condom."