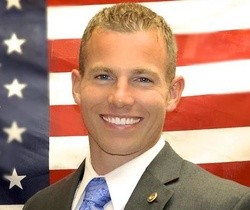 The Missouri legislature is getting national attention again -- and not exactly the good kind. As we reported last week, Representative Rick Brattin, a Republican, is pushing a proposal to mandate that "intelligent design" be taught in all Missouri schools alongside evolution, telling us that he's a "huge science buff," who believes different origin theories should get equal treatment. His comments got him some love from Mother Jones magazine, and now the National Center for Science Education is weighing in. Unsurprisingly, they aren't pleased.

"This is the last thing Missouri teachers need," says Eugenie Scott, executive director of NCSE. "Particularly since his definition and understanding of allegedly scientific defintions are simply wrong."

It goes into close detail about how evolution must be presented based on the interpretation of "theory" and "hypothesis" that he lays out in the bill, and the legislation mandates specifics on how schools should go about changing their curricula and textbooks.

"He's defining scientific subjects that teachers are then directed to teach," Scott tells Daily RFT. "This is just unprecedented."

Her group works to defend the teaching of evolution and climate change in schools across the country.

While Brattin told us that his legislation is not about religion or creationism, Scott says it's pretty obvious what he's trying to do and that he is relying on past creationist literature to explain it. She points to his use of "naturalistic means" in the bill, in which he argues that the "theory" of evolution assumes a natural origin and thus excludes other possible "intelligent design" scenarios. The bill, full version on view below, says:

"Biological evolution", a theory of the origin of life and its ascent by naturalistic means. The first simple life was developed from basic elements and simple molecules through the mechanisms of random combinations, naturally occurring molecular structures, other naturalistic means, and millions of years. From the first simple life, all subsequent species developed through the mechanisms of random variation, mutation, natural selection, adaptation, segregation, other naturalistic means, and millions of years. The theory is illustrated by the evolutionary phylogenic tree. Theory philosophically demands only naturalistic causes and denies the operation of any intelligence, supernatural event, God or theistic figure in the initial or subsequent development of life.

So while Brattin is presenting it as an "equal treatment" bill, if you read between the lines, Scott says it's clear that the intent here would be to actually remove evolution entirely from the curriculum -- given that it defines evolution as a theory that excludes others/

"He has...a confused understanding of how science works," says Scott.

Continue for more of our interview with Eugenie Scott and for a full draft of the bill.

Further, the imposition of intelligent design on all schools -- and materials used in the classroom -- is just not practical.

And on top of all these concerns, it also makes little sense to have lawmakers dictate so closely the content of a subject in the classroom. "It goes to such extraordinary detail about all of these specifics that teachers ought to be teaching."

If passed, it would be impossible to implement and would result in evolution likely being removed from classrooms entirely, she says.

In our interview last week, Brattin defended against these kinds of arguments arguing that his bill has nothing to do with religion and that current practice is unfair to educators and others who want to see different theories in the classroom.