After Stacey Adell, 46, was shot in the abdomen yesterday night, he reportedly rushed to a gas station in north St. Louis looking for help.

But he couldn't find it in time.

Adell, who lived on Natural Bridge Avenue near Fairground Park, died last night, making him the seventeenth homicide victim in 2013 in the city of St. Louis -- and the latest to fall to gun violence.

At this point, there have been no arrests in the shooting are there are don't appear to be any suspects. The police incident report has few details, too, except that he was shot in the abdomen and was pronounced dead shortly after he was taken to a local hospital:

Incident: Homicide
Location: 3700 block of N. Grand
Suspect: Unknown
Dates/Time: 2/11/13 @ 22:52
Victim: Stacey Adell, 46-year old black male from the 3200 block of Natural Bridge, St. Louis
Synopsis: Officers responded to a call for a "victim of a shooting." They discovered the victim in the above location with a gunshot wound to the abdomen. The victim was transported to a local hospital where he was pronounced deceased. The investigation is ongoing.

The Post-Dispatch reports that he ran into a gas station on North Grand Boulevard looking for help.

It appears that the station was just a block away from his home -- which was likely the site of the shooting. The investigation is ongoing. 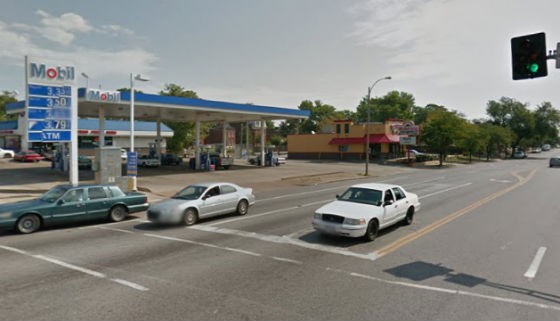