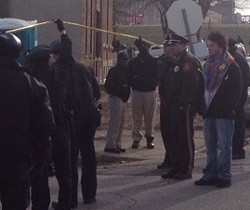 The Mardi Gras celebration in Soulard turned violent on Saturday when north St. Louis County resident Otis Roberson, 32, allegedly pulled out a handgun and pointed it in the direction of two police officers.

Both officers, fearing for their safety, fired back and killed him, police say. The incident -- at around 2:30 p.m. near the bar D's Place -- came just two days after a metro police officer shot and killed a 32-year-old man in a drug bust.

Daily RFT was on the scene after the shooting and got some photos of the aftermath, on view below.

Two uniformed officers who working the Mardi Gras festivities responded to a gunshot heard at 9th and Barton Streets, according to the official report.

When they arrived, they observed that Roberson, a black male who lived on the 2100 block of Empire Court in north St. Louis County, had a handgun.

Police say the officers repeatedly ordered the suspect to drop the weapon. Instead, Roberson allegedly pointed it in the direction of the two of them. In self-defense, both then fired at him and struck him, police say.

Roberson was transported to a nearby hospital where he was pronounced dead.

Police Chief Sam Dotson -- who has been vocal about the importance of gun control in his first month on the job -- tweeted in response:

There is nothing more volatile than mixing alcohol and guns. Please leave them at home if you are drinking.

Daily RFT was nearby at the time and heard people shouting, "The police are shooting people!" and "Someone's been shot!" at around 3:15 p.m.

When we arrived to the intersection, there were dozens of cops on the scene and several blocks were taped off as crowds gathered to see what had happened.

Here's the full report from police, followed by more photos from the crime scene.

Incident: Officer Involved Shooting
Location: 9th and Barton
Dates/Times: 2/9/13 @14:34 hrs
Suspect: Otis Roberson, 32-year old black male from the 2100 block of Empire, St. Louis
Synopsis: Two uniformed officers working secondary heard a gunshot and responded to the area of 9th and Barton where they observed the suspect with a handgun. The officers repeatedly order the suspect to drop the weapon however, the suspect pointed the weapon in the direction of the officers. Fearing for their safety both officers fired at the suspect striking him. The suspect was transported to a local hospital where he was pronounced deceased. One officer is a 56-year old male with 33-years of service and the other is a 51-year old male with 22-years of service. Both are placed on 3 days of administrative leave which is standard operation procedure. The investigation is ongoing. 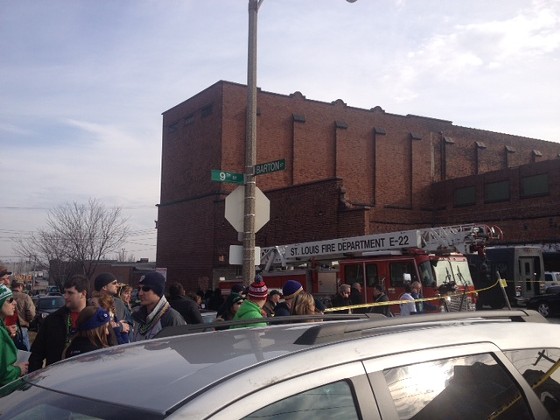 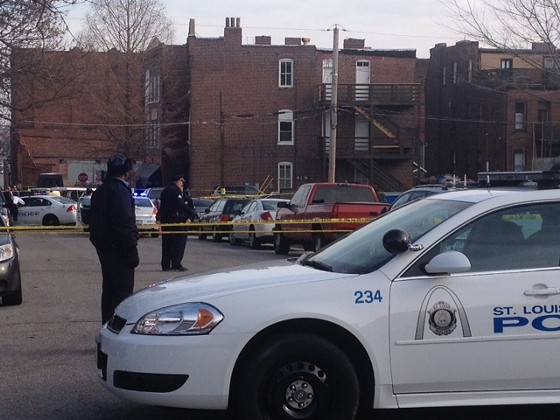