A lot of people had a lot of fun at the Mardi Gras festivities in Soulard on Saturday. If you missed it, or want to relive your drunken haze, we recommend you check out our not-safe-for-work slideshow and our collection of goodies from social media.

But how many people really had too much fun, i.e. left with more regret than just a hangover?

Based on numbers provided to us by the St. Louis Metro Police, there were 80 total arrests -- 76 of which were for underage drinking.

There was a heavy presence of cops and other law enforcement officials in Soulard, as is evident in our photo collection below of police mingling with the rowdy crowd.

Can't say they didn't warn you:

Spread the word...we have a zero tolerance policy for underage drinking. #STLMG

There will be both uniformed and undercover officers on the lookout for underage drinkers...we have a zero tolerance policy. #STLMG

And what were the other four doing?

Police tell us that one was arrested for marijuana possession (a bust which, by the way, could lead to a less strict punishment going forward).

Two were arrested for "resisting arrest" and one other person was charged with "interfering with an arrest." 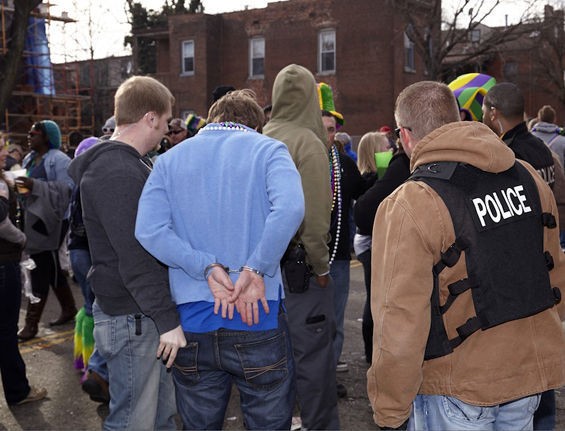 This was all in addition to a shooting nearby in Soulard that left one man dead that afternoon.