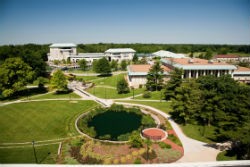 It's the call that no law enforcement officers want to hear -- an unidentified suspect with a gun on a college campus.

As it turns out, officials say, there was no threat.

What caused the scare?

Captain Mike Dixon of the Madison County Sheriff's Office says in an e-mail, sent out shortly after the situation was resolved, that the lockdown was prompted by the sighting of an off-duty police officer who had a gun on him.

He says, "No one was threatened or harmed or in danger. At this point doesn't appear to be anything criminal."

Campus officials say that one student saw another student carrying a gun at the Math/Science building on campus and sent a text to her sister, who then called the Madison County Sheriff's office.

It turned out that the student identified was an off-duty cop.

The call came just a month after a shooter entered the Stevens Institute of Business and Arts in St. Louis and fired shots at a financial aid administrator.

The incident also comes the same week that the St. Louis Metro Police Department is offering Workplace and School Violence Training seminars, a move prompted by the tragic elementary school shooting in Connecticut in December.

Here's the full announcement from the school:

At approximately 11 a.m. today, a student observed another student with a gun on his person in the Math/Science building. The student sent a text to her sister who in turn called the Madison County Sheriff. Fortunately, there was no threat. The student with the gun was an off-duty police officer.

Emergency procedures worked as intended:
-Madison County Deputies arrived on campus at 10:56 a.m.
-LC Alert was sent at 11:07 am - message stated campus was on lock down and everyone should stay where they are
-Madison County Sheriff Department responded to the building and determined that the report turned out to be an off-duty police officer with ID and a permit to carry a gun
-At 11:24 am, LC Alert "All Clear" message was published
-Madison County Sheriff Department will hold a debriefing conference next week. They were very complimentary of the swiftness of our response and appropriate action taken by the college