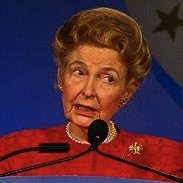 Today in St. Louisans weighing in on national politics, Daily RFT brings you the always charming Phyllis Schlafly, president of the Eagle Forum and conservative activist with reliably delightful views on other human beings.

Today's topic? The Violence Against Women Act, the one that Congress failed to extend last year.

Why is VAWA really, really awful? Schlafly's got some wisdom for you.

Schlafly has a statement in a newsletter this week from the right-wing Family Research Council, slamming the proposal. FRC writes:

"In its 17 years of operation," Phyllis Schlafly explains, VAWA "has done little or no good for real victims of domestic violence, while its funds have been used to fill feminist coffers and to lobby for feminist objectives and laws. Although every spending bill should be subject to rigorous auditing procedures in order to curb waste and fraud, VAWA has somehow ducked accountability for the [$660 million] a year it doles out to radical feminist organizations."

The comments from a column she penned for conservative site townhall.com, which have earned her a fair amount of (negative) attention.

There's a lot in the column, so we recommend you VAWA-supporters out there looking for a nice afternoon headache just make your way over to townhall.com now.

Here are some highlights:

Despite rigid feminist dogma that there are no gender differences, VAWA is totally grounded in feminist-created gender stereotypes. Starting with its title, Violence Against Women, its fundamental assumption is that men are naturally batterers and women are naturally victims.

In other words, men are always guilty, and women must always be believed without fear of being punished for perjury. VAWA assumes there is no violence against men, and it doesn't provide services for men who are victims of domestic violence.

And the argument that women can allege whatever they want through VAWA:

The feminists have so broadened the definition of domestic violence that it doesn't have to be violent and can usually be whatever a woman alleges. Definitions of domestic violence include vague and overbroad concepts such as emotional distress, harassment, annoyance or merely unpleasant speech.

And this gem, that VAWA unfairly promotes the hatred of men:

Instead of promoting divorce, breakup of marriage and hatred of men, VAWA should be revised to encourage counseling when appropriate and voluntary.

Continue for comments from a Missouri official who today is urging the reauthorization of VAWA.

In a news release sent out this afternoon, Koster notes that in 2011, there were over 40,000 incidents of domestic violence reported in Missouri.

And that year, his office says, 30 women were killed by their husbands or boyfriends. Women in the state reported more than 1,400 forcible rapes or attempted forcible rapes. And while 10,000 women in need were able to find a place at a shelter, nearly 20,000 more were turned away.

Letter in Support of VAWA Reauthorization