Here's one way to successfully rob a bank, courtesy of the Columbia, Illinois Police Department: Put on a gray wig and red lipstick and hand the teller a note stating your intentions (and the fact that you have a gun).

And with a good enough disguise, you just may escape the scene of the crime with authorities -- despite surveillance footage -- unable to positively determine your gender.

Such was the case with a robbery on Monday that left police questioning whether the suspect was a male or female -- a fact which, we can only imagine makes the investigation all the more difficult.

Chief of Police Joseph Edwards says in a news release that the Columbia Police Department and the FBI are now investigating the robbery that took place at 1:02 p.m. on Monday when a suspect entered Commerce Bank at 955 Columbia Centre. The suspect allegedly handed over a note that said he/she wanted money and had a gun.

The teller complied and gave up an undisclosed amount of U.S. cash.

The suspect was apparently inside the bank for just over a minute-and-a-half and then left through a door that led to an adjoining grocery store called The Market Place. The suspect was caught on video at the bank and the store.

In the original announcement of the robbery, police refer to the suspect as a "they," then a "she," then "is believed to be a female."

A later alert, though, says: "The gender of the suspect is unknown at this time."

Continue for a larger photo and the full alert.

The Post-Dispatch has gone with the "believed to be female" thing. And that write-up has this additional close-up shot: 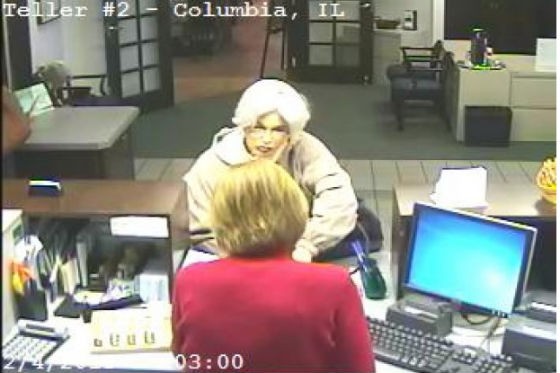 The P-D also notes that this suspect may have robbed two or three other places.

But apparently not enough times to get a close enough look.

The Columbia Police Department and the FBI are investigating a bank robbery that occurred today around 1:02pm. One suspect entered the Commerce Bank and handed the teller a note stating that they had a gun and wanted the money. The teller complied and gave the suspect an unknown amount of United States Currency. The gender of the suspect is unknown at this time.

The suspect was inside the bank for just over a minute and a half. The suspect then left through a door that led to an adjoining grocery store, The Market Place. Video from the bank and store caught the suspect on video.