This is one way to attack the enemy.

Opponents of Antonio French, Alderman of the 21st Ward of St. Louis, are allegedly stealing his yard signs, because we all know that will, um, make a huge difference in local elections?

And in a refreshing break from the he-said-she-said of St. Louis' election season, there is hard proof in this case that somebody is stealing French's signs. The alderman's nicely edited video is below.

Here's the short footage French posted on Thursday, which clearly shows a man walking onto a yard and stealing his signs and those for Board of Alderman President Lewis Reed, a mayoral candidate.

"It's just petty. It's silly. Yard signs don't vote," French tells Daily RFT. "All it does is probably have the opposite effect: It fires up our base. Constituents call me mad as heck. Seniors are calling me asking for more signs, saying, 'I'm gonna tie them to my fence!'"

French claims that a total of around sixty to seventy-five of his small yard signs have been stolen and that nineteen larger ones have also gone missing or neen defaced. Each of those, he says, costs around $50-60.

"We just order more signs," he says. "It's an annoyance more than anything else."

French says he got the video off of a security camera and that a man stealing his signs was eventually caught in broad day light.

"Several people called 911 and called me too," he says.

His video includes photos he himself took of the individual being arrested, including this one. 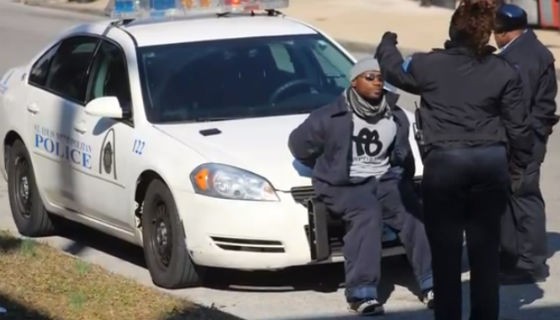 KSDK says that a man named George Treadway was arrested in connection to the thefts and charged with Class 4 election offenses. The channel also reports that the sign-stealing has sparked a war of words between the Lewis Reed and Francis Slay campaigns.