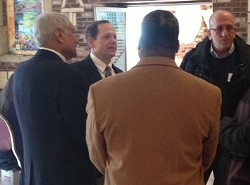 As the primary election for the mayor of St. Louis nears, Lewis Reed, Board of Aldermen president, and Mayor Francis Slay, are both competing for notable endorsements across the city.

This weekend, Slay held a fundraiser with a group of Muslim leaders in St. Louis -- at an event where he touted the importance of the city's elected officials supporting diversity.

Does he have the support of leaders in the Muslim community?

"The continuity of leadership is important," Noor Ahmed, a physician, told Daily RFT at a Saturday morning fundraiser at Grbic restaurant on Keokuk Street. "He cannot solve these problems over night. It takes a long time."

Slay is hoping to stay on for an unprecedented fourth term as Reed, his primary challenger, is pushing to oust the mayor by arguing that the city needs a change in leadership. And one of Reed's main talking points so far has been that the current mayor has created a divided city -- a charge that Slay repeatedly countered in his remarks at the Saturday event.

"I see it just like Obama," Ahmed said. "He did what he could for four years -- but we need the continuity. If someone comes in a builds a building, you don't want someone else demolishing it."

Introducing the mayor in front of a small crowd of around forty supporters, Hashim Raza, an internist, said that it's important for members of the Muslim community to join together and back someone who has supported them.

The event was organized in part by a group called the Missouri Muslims for Civic Education -- which is not formally endorsing a candidate.

Addressing the small crowd, Slay touted his ongoing relationship with leaders in the Muslim community, saying, "I feel like I have a lot of friends here and I want you all to know, as your mayor...I value diversity and inclusion."

Embracing immigration, he said, is a priority. "It's about mutual respect. It's about making sure we understand that everyone has something to contribute."

After his speech, Slay told Daily RFT that the fundraiser was part of his larger mission to emphasize the inclusiveness of the city. "They are an important part of our community.... We have to let people know that we are a welcoming place. You can be of any ethnicity or religion -- if you come to St. Louis, you can achieve success and be respected." 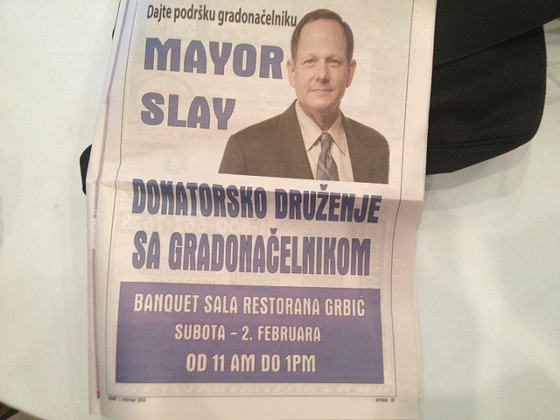 More from our Politics archive: "Rep. Tony Dugger On His Voter ID Bill: "Most Of The Feedback...Was On The Negative Side""