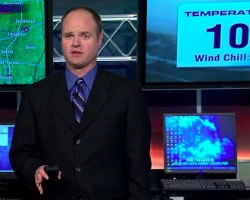 Reporting the weather can be a dirty business in St. Louis -- and for Chris Higgins, FOX 2 meteorologist, the snowstorm over the weekend apparently pushed him to a new low.

Higgins has posted on his Facebook page a ranty "open letter" directed to "all the haters" out there.

Who are these haters, you ask? People of the Internet who have reportedly called him "a liar and an idiot" for intentionally misreporting the snow, perhaps as part of some sort of, you know, large weatherman conspiracy. The accusations got to be so intolerable, Higgins writes, that he needed to defend his integrity. We've got the highlights for you below -- but the whole letter is worth a read.

This is an open letter of sorts to respond to the many posts from folks who claim this storm was a complete surprise and who have gone as far as to question my integrity by calling me a liar and an idiot. I do this at the risk of getting in trouble but I feel it necessary to defend my integrity.

To all the haters, I ask you these questions.... Did you or did you not know it was going to snow last night? If you saw any of my forecasts or read any of my posts then you did. In fact, I even used the words "don't be surprised...there is accumulating snow on the way." I also forecast about two hours of heavy snow...and guess what...it snowed for around two hours! I laid out the likely area for accumulating snows from about Bowling Green and Mexico down southeast into the STL metro area and then into southern IL. Yup...nailed that too! What I DID GET WRONG...BUT WAS CLOSER THAN ANY OTHER FORECAST IN TOWN...where the amounts. I said to expect a dusting to 2 inches....although for some reason everyone was keying on the dusting part??? That part of the forecast was low and I readily admit that. But you cannot sit there and tell me I didn't tell you it was going to snow...and that I didn't say is was going to snow heavily...because I did.

It doesn't end there. He's not only displeased with folks who falsely claimed he said there'd be no snow at all, but he's also apparently mad at those who alleged he lied about the amount of snow. These guys have launched an an "assault" on his "character and integrity."

And he's not just going to sit there and take it, he writes:

I pretty much nailed EVERYTHING about this storm EXCEPT the exact amounts. Again, I readily acknowledge that my numbers were low...because I'm man enough to admit where I was wrong. So to those who have called me a liar and worse -- please spare me the insults to my character and integrity. You can say I got the forecast wrong, but you cannot call me a liar.

Daily RFT sent Higgins an e-mail before publishing to see if he wanted to chat further about his haters. We'll update if we hear back. (Update: Check out our follow-up interview with Higgins).

In the meantime, make your way over to his Facebook status, which now has thousands of likes and comments.