Republican Representative Eric Burlison knows it's not all that likely he will have much success with his controversial "right-to-work" bill -- a proposal to ban labor union requirements, but that is not stopping him from pushing the bill.

"This is about economic freedom and individual liberty," Burlison tells Daily RFT. "You should be able to go out and pursue any line of work...without having to join and pay dues to an association in which you disagree with their philosophy."

The left has slammed this kind of legislation across the country -- and with Governor Jay Nixon in charge, Burlison faces serious obstacles in Missouri.

So why's he moving forward?

House Bill 77, full draft version below, "specifies that no person as a condition or continuation of employment can be required to engage in or cease engaging in specified labor organization practices."

The bill says that employees can't be required to become a member of a labor organization and pay dues or pay equivalent amounts to third parties of unions.

Conservative supporters of right-to-work, which recently passed in Michigan under a Republic governor, argue that workers in any industry shouldn't be forced to join any union if they don't want to. But opponents of this kind of measure say that right-to-work can erode fundamental labor protections that unions can provide.

"Because the union collectively bargains for everybody, they say they have the right to collect an association fee," Burlison says. 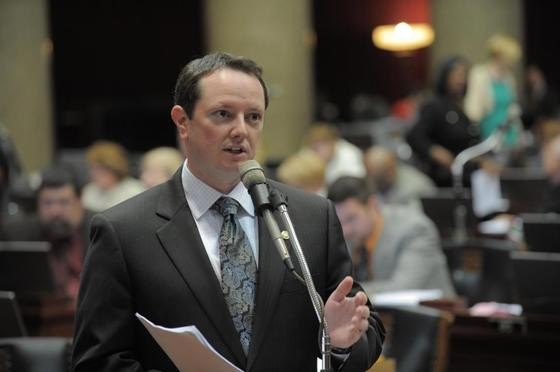 What he and some of his GOP colleagues want to do, he explains, is "empower an employee to say, 'I don't want to be a member of the union.'... You can bargain your own wage, your own benefits."

It's good for the economy, Burlison argues.

Continue for more of our interview with Eric Burlison and a full draft of the bill.

Still, he admits, "It's going to be a very difficult road."