As the March primary election nears, the intensity of the mayoral race is increasing -- and so is the inflow of cash.

As we reported on Monday, Lewis Reed, the current president of the Board of Aldermen, more than doubled his donations after a weekend of fundraising. But where is the money coming from?

The Slay campaign has provided Daily RFT with a handy graph, below, showing how a large proportion of Reed's donations are from outside of Missouri.

What is Reed's response?

Here's one chart, courtesy of the Slay campaign:

After a mayoral debate on Tuesday night that featured both Democratic candidates, Daily RFT asked Reed how he was feeling about the state of his campaign's finances.

"I'm feeling great about the donations, from this standpoint: We are getting a lot of our donations from the average everyday person, on the streets, and these folks are the voters," he says. "We will never have the war chest that the mayor can unmask from all of his Republican donors. But we do have enough money to win a race, especially our targeted race that we are running. We should bring home a big win in March. We are marching toward our victory number, and we're real close to hitting it, so we're just going to continue doing what we're doing and continue to raise money."

Reed adds, "We're gonna be all over the country at fundraisers where businesses and people and relatives and friends want to make sure that we have an opportunity for change in our city."

In response to criticisms that a large chunk of his money is coming from out of state, Reed slams Slay for accepting GOP funding. (The mayor has come under fire for receiving donations from donors Sam Fox and Rex Sinquefield).

"The overwhelming majority of those donations are coming from big Republican donors that technically have never given to a Democratic candidate, so you say, okay, why is that?" Reed says. "So, yes, my donations are gonna come from anybody across the United States that [is]...interested in making sure that we have a strong community here, whether it's because they have family members that live here, family members that have fallen under tragic conditions, because of lack of engagement from our city government, whether they have business here, whether they have relatives, whether they used to live in St. Louis, also." 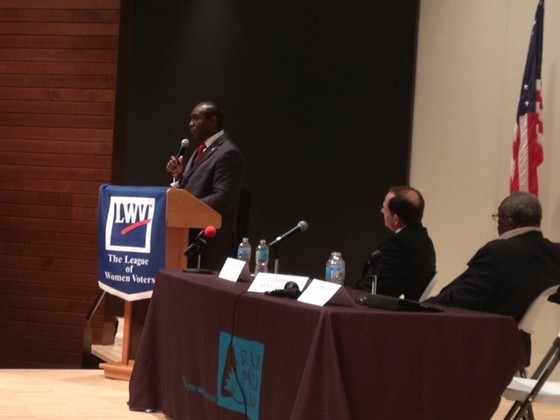 He continues, "A lot of the donations that we've gotten -- like when we went to Atlanta, Georgia -- the majority of the business people that were in that fundraiser started out in St. Louis, lived in St. Louis, could not get their business started in St. Louis, went to Atlanta, Georgia, built a successful business and then turned around. And now their family...is still back here, so they're still doing things within our community. But that's a sad statement. We need to be the first choice for them."

Continue for more details on the state of the race's finances.