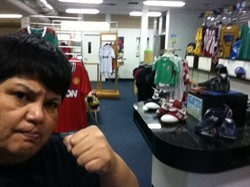 It's been a rocky start of the year for Minerva Lopez, the owner of Gooolll, a sports apparel store on Cherokee Street -- and that's partly because of, well, rocks.

Lopez tells Daily RFT that vandals have not once, but twice thrown rocks through her storefront, shattering her windows -- first on Saturday, January 19, and again late Monday night.

"It's worrisome, because I'm at one of the busiest intersections," she tells us. "Business is slow as it is. I don't want it to continue to me, much less anybody else."

"I'm a good person. I get along with everyone here," Lopez says, adding that she doesn't know why she would possibly be targeted. "This was just really crappy."

She says it's generally bad news for Cherokee Street -- i.e. the Sesame Street of St. Louis -- where she operates her shop that primarily sells soccer merchandise.

When people visit Cherokee Street and see these acts of vandalism, they may not want to come back, she laments.

"It's a marginalized neighborhood that has been slowly up and coming...for the past fifteen years," she says. "These acts of vandalism are indeed worrisome."

Lopez adds, "They see beautiful storefronts with two broken windows.... It makes people weary about wanting to come in."

She says she hasn't yet found anything substantial missing from the store from either incident, and notes that in both cases, police were very helpful.

But it might cost her thousands to fix both windows.

"They will get replaced eventually," she says.

Here are the photos she sent to us.