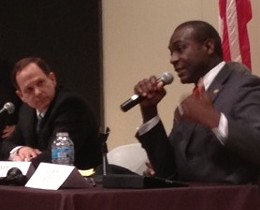 What is the State of the City of St. Louis? Depends on who you ask.

Lewis Reed, the President of the Board of Aldermen, paints a somewhat grim picture -- a divided city that remains unsafe and lacks real economic opportunities. But Mayor Francis Slay, who first took office twelve years ago, describes a St. Louis that has improved dramatically over the last decade and has its struggles -- but is on track for greater prosperity.

Such were the dueling narratives that played out last night at a mayoral candidate forum in which the Democratic incumbent and his primary challenger debated crime, education, economic development -- and race.

And sitting in between Reed and Slay at the St. Louis Public Library was Jimmie Matthews, an underdog Democratic candidate who was an alderman in the 1980s. 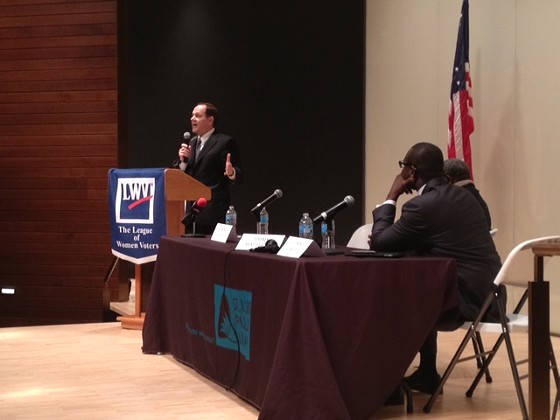 At one point, when it was Matthews turn to talk after a particularly heated back-and-forth between Reed and Slay, he said, "Wow, these guys are arguing!... We should be civil."

Matthews frequently provided laughs to the crowd with bizarre and candid comments in between the more contentious arguments of the current mayor and Board of Aldermen president. The event, moderated by the St. Louis League of Women Voters, drew a crowd of around 450 attendees that spilled into two overflow rooms. The audience seemed to lean toward Reed -- or at least the opponents of Slay were more vocal with frequent hissing and booing in response to the mayor's comments on a range of issues including water, crime rates, racial integration -- and controversial developer Paul McKee. At one point he was booed for saying the city has too many "thugs."

"Remember where we were twelve years ago," Slay said in his opening pitch. "I think I've learned a lot and I can tell you this: This job plays to my strengths. First of all, I work real hard. I work with partners. I've built a strong team. We have tackled some of the toughest issues. My word is good. I'm very disciplined in my job -- I show up.... I also have an even temperament and a great attention to detail."

Slay said that his consecutive terms have given him the opportunity to really make a difference in education reform, city finances, health issues, LGBT rights and more.

Reed praised development in his ward, but said the economy overall has languished.

"We can do that all across the city," he said, referencing the successes of his ward. "St. Louis' best days are in front of it, but we have to begin a new path and the difference is not that we don't all want the same thing. The difference is the path we take."

The topic of crime immediately prompted bickering with Slay accusing Reed of politicizing the topic and Reed interrupting the mayor mid-speech. And in his closing remarks, in reference to improvements the city has made in crime, Reed said, "We cannot take credit for a national movement."

Reed also criticized Slay for his "only big idea" of reintegrating the city into the County of St. Louis, though the Alderman said he was open to a merger. ("I don't think anyone's accused me of having one big idea," Slay later responded"). Matthews opposed it.

In his closing remarks, Matthews slammed both his opponents, saying they've both had a lot of time to improve the city. "I love both these gentleman but facts speak for themselves." 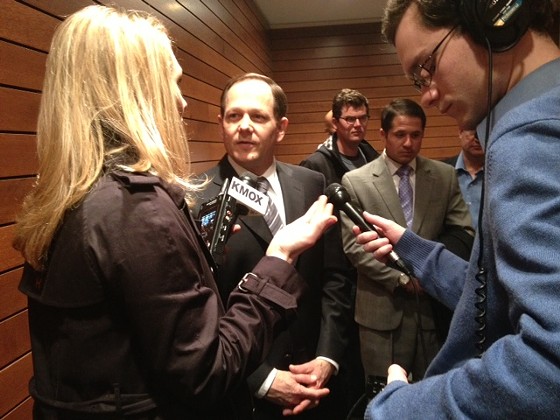 More from our Politics archive: "Stacey Newman on Missouri GOP Gun Bill: "Could you imagine anything crazier?""