Republican Representative Casey Guernsey is firing back against recent comments of Representative Stacey Newman regarding his bill to block federal gun control measures in Missouri.

Earlier this week, Newman said to us, "Could you imagine anything crazier?"

Guernsey tells Daily RFT that there is broad support -- even from "folks that are more liberal on gun control" -- to have Missouri override initiatives of the President of the United States.

And his thoughts on Newman's own bill to limit the sale of guns to licensed dealers? "It's a disaster," he says.

His legislation, House Bill 170, "specifies that a federal official must not enforce a federal firearm law when the firearm is manufactured and remains in the state and that any new federal law banning or restricting ownership of a semi-automatic firearm is unenforceable."

Guernsey wants to empower residents of Missouri to push back by giving them a legal tool to fight any efforts to ban or restrict their access to guns -- even if the enforcement comes directly from the federal government.

"My position is pretty straightforward," he tells Daily RFT. "Anything more that limits law-abiding Missouri citizens' ability to keep and bear arms and take advantage of their basic constitutional rights is a major concern for me. There are plenty of laws on the books as it relates to gun crimes.... If those laws were enforced, we'd all be much better off." 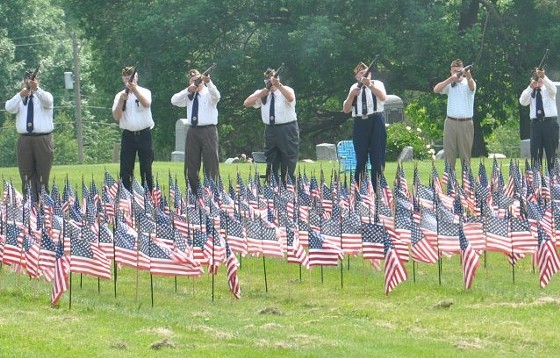 He continues, "The solution isn't eroding our constitutional rights further. I think it would take us several steps backward in dealing with these major issues.... If the Democrats and the Obama administration want to engage states in...discussions that are substantive and would actually address real problems facing society, that would be a productive conversation.... But they are only interested in taking advantage to further their political agenda."

Supporters of stricter gun control argue that they are not trying to take away guns from law-abiding citizens or block access, but rather are pushing stricter regulations that help keep weapons out of the hands of criminals in an effort to reduce gun violence.

But Guernsey says that most of what he has heard from the president amounts to violations of the constitution; his bill would allow for any person who violates federal law as it relates to the manufacture, sale, transfer or possession of a firearm in the state of Missouri to request the Attorney General to defend him or her for the violation.

Continue for more of our interview with Representative Casey Guernsey.

Meanwhile, Newman is pushing a bill that would mandate gun sales go through licensed dealers such that there would be universal background checks -- mirroring a proposal of the president.

"It's a disaster. It's a non-starter," Guernsey says of her idea. "It doesn't address the problem, and it makes it more difficult for law-abiding folks who want to own guns to be able to procure them."

He says, "The background checks system we got right now works and certainly there's a number of things related to the...[national] database we can do to strengthen the process without going down this road."

Currently, individuals can buy guns across the country online or through private sales that don't require these checks, and some Democrats see universal background checks are a no-brainer that Republicans can support.

But Guernsey says that people should be allowed to sell their guns to a family member or a neighbor and that limits on those exchanges would be a violation of their rights.

Guernsey says that he and his colleagues are working on adding more specifics to his bill to directly address some of Obama's proposals -- potentially through amendments or additional bills to help block federal orders.

The response so far, he adds, has been "overwhelmingly supportive -- almost one hundred to one, for sure...even some folks that are more liberal on gun control."

Continue for full drafts of the bills in question.