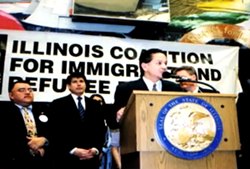 Illinois law now officially says that undocumented immigrants can legally obtain driver's licenses -- a big win for advocacy groups that argue the change is a boost for public safety and law enforcement on the roads.

Lawrence Benito, an Illinois immigration advocate, tells Daily RFT that this new policy means that hundreds of thousands of drivers in the state will be able to apply for temporary licenses. This includes immigrants just across the Mississippi River who may frequently travel to St. Louis.

And even though Missouri does not have this kind of law on the books, once immigrants receive these licenses, they will be able to drive to the state like any other licensed driver.

"This is a public safety issue," he tells us. "If we have 250,000 unlicensed immigrants on the road, this impacts everybody who shares the road."

Proponents of the measure, signed into law over the weekend, have argued that this is an important temporary fix, given that there is a large population of undocumented immigrants who are driving illegally.

"Law enforcement has supported this measure," says Benito, chief executive officer with the Illinois Coalition for Immigrant and Refugee Rights. "They want to know who is driving behind the wheel."

Illinois is the fourth and largest state to allow undocumented immigrants to drive -- and Benito says he is not aware of any specific effort to push a policy like this in Missouri.

But drivers who go to Missouri and have one of these licenses would be safe, he says.

"Just like any other driver, if there is some kind of infraction and they are asked to produce their driver's license, they would produce it," he says. "They would be written a ticket. And they would be sent on their way.... It would be business as usual."

It'll be around ten months, he says, before the law is actually implemented and in the meantime, his organization is continuing to do outreach and education on the law to make sure those impacted understand how it works. Critics have raised concerns about the potential for fraud.

He points out that these are temporary licenses that are distinct from normal ones; they can't be used to board a plane or buy a gun and they aren't just given out over the counter at the DMV.

"They are only used for one thing and that is to drive," he says.

"It's given people hope, because it's...the product of many years of organizing," he says.

While there will be contentious and complex immigration debates across the country in the coming months and years, this is about coming up with a solution to a problem immediately, Benito adds.

"Here in Illinois, legislators put the politics of fear and hate aside, and in a bipartisan fashion, came up with a commonsense solution, a practical solution...for today," he says.

More from our Immigration archive: "Wanna Be on the Presidential Ballot in Missouri? We Need to See Your Birth Certificate, Please"