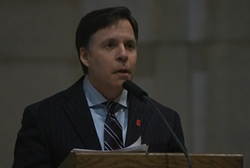 Since news broke that St. Louis icon Stan Musial has died, fans have had many opportunities to pay tribute to the late, great Cardinal.

And on Saturday, fans got to say a final goodbye to the baseball legend, packed inside the Cathedral Basilica in St. Louis for Stan the Man's public funeral service.

The ceremony included an emotional eulogy, full video on view below, from sportscaster Bob Costas, who said, "The bond and attachment between this player and this city is unique and lasting."

Here's footage of Costas' full speech, courtesy of the Cardinals.

"Stan's career and life were both too vast and too meaningful to all of those here today and to millions more here in spirit for any one person to sum it all up. But, like all of you, my own life was touched by Stan Musial."

"The bond and attachment between this player and this city is unique and lasting."

Quoting Mickey Mantle: "I had as much ability as Stan maybe more. nobody had more power than me. nobody could run any faster than me. But stan was a better player than me, because he's a better than me. because he got everything out of his life and out of his ability that he could and he'll never have to live with all the regret that I live with."

Quoting Harry Cara: "'Take a look, fans. Take a good, long look. Remember the swing and the stance. We won't see his like again.' Harry was right. We never have and we never will."

And here's footage of the speech from Martin Schwarze, Musial's son-in-law.