Instead of having legislators force law enforcement agencies around Missouri to adopt half-assed school safety policies, knowledgeable officers on the frontline should be crafting and implementing proposals to increase security in the state's classrooms.

At least this is the thinking of Christian County Sheriff Joey Kyle, who has been working with local school leaders to put together what he says is a comprehensive plan to protect schools from shooters. One key component? Arming teachers.

"I want it done right," Kyle tells Daily RFT. "I don't want a politician telling me -- a law enforcement specialist -- how it should be done. I want to set up procedure, develop technology, develop a process and then have legislators say, 'This is a good idea. We need to make it statewide.'"

Kyle says that arming school employees is just one piece of the puzzle to protecting his county's schools -- but a vital one.

"If these [shootings] are gonna get stopped, who's gonna be the people to stop it?" he says. "You're there when the incident occurs. Let's empower people."

He continues, "When you're talking about teacher training...throwing trash cans, staplers, pens, at an armed assailant is ineffectual.... You are asking an unarmed solider to go up against a tank." 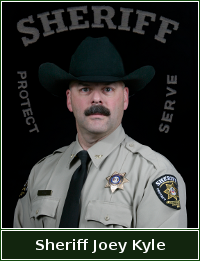 The comments from Kyle, who met with school superintendents earlier this week to discuss his plan, are the latest in an increasingly contentious gun debate in Missouri and across the state.

This week, as we reported on Wednesday, Democratic State Senator Maria Chappelle-Nadal has been pushing a bill that would require parents to tell school officials if they own guns.

"Gun ban talk is a hot topic," he says, "but I've got statistics out the ying-yang that shows gun bans are ineffectual."

Lawmakers that support stricter regulations on guns argue that they are not trying to limit the Second Amendment but simply enact commonsense policies to reduce violence.

Kyle, however, thinks these legislators generally don't know what they are talking about -- which is why he wants to be proactive in adopting a plan that will work.

"Some...legislator is going to come down with an idea about school security. And it may or may not be appropriate," he says.

In addition to arming teachers, Kyle says he's interested in enhancing security through many other means.

"It's about a thought process, a philosophy, a paradigm," he says. "We are talking about the entire package."

And he says that there are cost-effective ways to do this.

In terms of arming teachers, Kyle says strict vetting and training is essential. So far, he adds, about three of eight school districts in his county are on board to push forward with these proposals.

"These events historically take less than ten minutes for them to carry out," Kyle says of school shootings. "The average response time [of police] across the country is longer."