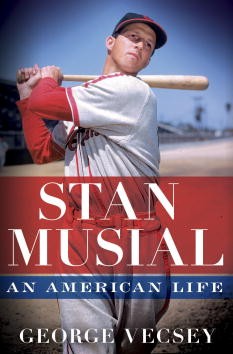 Here's your weekly St. Louis bestseller list for the week ending January 20, as compiled by the St. Louis Independent Booksellers Alliance and based on sales at Left Bank Books, Main Street Books and Subterranean Books.

Even though hockey's back, this is the time of year when we yearn most for baseball, to be able sit outside in the heat and humidity (that's why there's beer) and cheer on our team. The Cardinals know this. That's why they have the Winter Warm Up every January. This year, it happened to coincide with the passing of Stan Musial, who, in addition to being a Hall of Fame player and a really nice guy, was also the embodiment of Cardinals history.

If it's too cold to watch or play baseball, you might as well read about it. Accordingly, this week's bestseller list is full of books about the Cards: George Vecsey's biography of Musial, Tony La Russa's memoir One Last Strike and a board book called St. Louis Cardinals 101 which, presumably, you can read to your two-year-old every night so she'll be fully prepared for Opening Day. (Hey, according to the cover copy, it's required reading.)

And there's also The Single Father's Guide to Life, Cooking and Baseball by St. Louis native Matthew S. Field and William Knoedelseder's Bitter Brew, back again, because the story of the Busch family is inextricably intertwined with that of the Cardinals.

Also new to the list this week: Conducting Business by former St. Louis Symphony conductor Leonard Slatkin which, presumably, shows that conducting an orchestra is more than just waving a stick around, and Mrs. Lincoln's Dressmaker by Jennifer Chiaverini, a novel about Elizabeth Keckley, who you might already know a bit about if you saw the movie Lincoln.

1. Tenth of December: Stories by George Saunders 2. Never Hug a Nun by Kevin Killeen 3. Bitter Brew: The Rise and Fall of Anheuser-Busch and America's Kings of Beer by William Knoedelseder 4. Conducting Business: Unveiling the Mystery Behind the Maestro by Leonard Slatkin 5. The Single Father's Guide to Life, Cooking and Baseball by Matthew S. Field 6. One Last Strike: Fifty Years in Baseball, Ten and a Half Games Back, and One Final Championship Season by Tony La Russa 7. This Is How You Lose Her by Junot Diaz 8. Stan Musial: An American Life by George Vecsey 9. Mrs. Lincoln's Dressmaker by Jennifer Chiaverini 10. The Dream Seeker by Matthew S. Field