Think It's Cold Today? At Least the River's Still Flowing 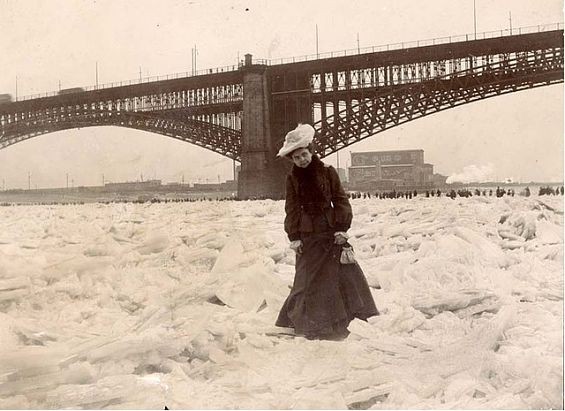 Yes, it's cold this week, the coldest it's been here in St. Louis in several years. What's particularly galling is that this cold is not as lovely and refreshing as we thought it would be last summer when the thermometer crawled up to 108. Remember that?

Back in the good old days before global warming, it got this cold a lot. The cold was enough to stop even the mighty Mississippi and Missouri Rivers. Cakes of ice would jam the Mississippi from the confluence to as far south as Cape Girardeau. And then St. Louisans would go out on the river to play.

Mere ice skating was considered passe. Anyway, as the Post-Dispatch reported during the freeze of January, 1910,

The ice floor of the river is not smooth, but is covered with irregular ice peaks and miniature bergs, parts of the ice jam that were caught by the freezing of the surface and were cemented together in a mass. Those going across stumble up inclines to jagged plateaus and then slide down into little valleys. The trip on foot across the river will tax the strength of an able man.

That didn't stop many from going anyway, some for the adventure, some because of rumors of a free chicken dinner in Cahokia. Some carried sticks, held horizontally so that if they fell through the ice, the ends would (in theory) catch and keep them from falling through. (This theory, fortunately, was never tested, or at least the reporter from the P-D never heard about it.)

During the previous freeze, back in 1905, a few enterprising souls had set up illegal gambling operations on the ice. Recalled A. W. Long of the Harbor Department,

The confidence men planted their gambling apparatus in the middle of the river and the police could not touch them. If this freezing weather continues, we will probably have the same thing this winter. The women might hold their euchre parties out there now since Chief Creecy has begun a campaign against them.

This was one of the few cheerful news stories about the freezing of the river. There were many, many more heart-rending accounts of poor unfortunates (mostly hobos and alcoholics) who had frozen to death and subsequently had to be carved out of blocks of ice and identified at the city morgue.

The river froze at least ten times between 1831 and 1938. The ice jams stopped not because the weather magically got warmer, but because of the construction of the Alton Lock and Dam, which stopped icebergs from flowing south down the Mississippi and blocking the city's water pipes. The river still freezes sometimes, though, as in this RFT file photo from 1994:

The snow fell with frozen flakes and it cut the face of the hurrying pedestrian. It was accompanied by a wind that crept under even the very warmest ulster. It penetrated to the core the frames of the poor. There was suffering in St. Louis last night, suffering that makes the heart ache and suffering that charity can not relieve...

(The same article reported that cold "stirred the bowels of compassion" of the mayor at the time, Cyrus Walbridge, who told the chief of police to "be kind to the poor." Walbridge, incidentally, showed up to work with "his oriental mustache...a mass of ice.")

On the night of February 11, 1899, an enterprising reporter decided to do a firsthand investigation of the effects of cold on the impoverished by spending "the coldest night of the year with the poorest family in St. Louis," the Downeys of 2251 O'Fallon Street in north city. The temperature was 16 below zero, the tenth coldest in recorded St. Louis weather history.

The eight Downeys occupied two drafty rooms and kept warm by gathering around the coal fire, tended by Mr. Downey, a former teamster currently unemployed due to an accident. They conserved coal by letting the fire go out at 9 p.m. and then huddling in bed, covered by "an old overcoat, the shawl and a piece of carpet." Their food budget for the week was $1.35. The reporter kindly went out and bought provisions for another day, along with coffee and oranges. The Downeys, he reported, were very cheerful and unaware that they lived in such misery. (There was no follow-up to report what became of them.)

Such optimism was not unusual for the P-D. During cold snaps, there was usually an interview with some doctor expounding on the medical benefits of cold weather. A specimen from 1904 claimed that "in a moderately cold winter day, one's body takes in one-seventh more oxygen than in warm weather." One Dr. Pierce ("an authority on diseases prevalent among women young and old") advised young people not to spend so much time indoors huddled around the stove or other heat source, breathing in old, sour air. "They become tender and sensitive," he claimed, "and are almost certain to catch cold."

And besides, cold, fresh air was so good for the complexion!

(Fresh air, incidentally, was also good for hens: It made them lay more eggs.)

But even the P-D could not find a positive angle in its report from 1882 of a jury forced to deliberate in the basement of the Old Courthouse in "a miserable, tomb-like apartment suggestive of a cell for refractory convicts. There was little light and less heat. The steam pipes do not run below the floor of the rotunda and the main offices. In this damp, cold, disagreeable hole, the jury remained for two hours."

The shittiness of the deliberation room finally stirred the bowels of compassion of the judge, who dismissed the jury for the night, and the P-D, which turned the article into a stirring call for better accommodations for jurors and what appears to be an attack on Mayor William Ewing for not taking better care of the courthouse in the first place. Y'all, somebody could fall down those stairs and sue the city! You can't get a sentimental human interest story out of that.