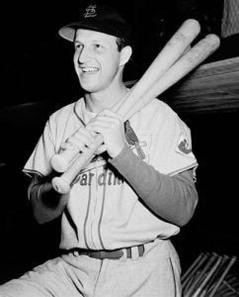 The death of Stan Musial is one of those rare occasions that prompts elected officials from across the state to send out press releases with virtually the same message -- one of praise and gratitude for the late Cardinal and Missouri icon. The latest incarnation of press-releases-honoring-Musial is a call to action to name the Mississippi River bridge after Stan the Man. We reported yesterday on a bill from state lawmakers to establish the Stan Musial Memorial Bridge. Soon after, U.S Senator Claire McCaskill followed up with an announcement of a federal bill that would, well, do the same thing.

See Also: - The Stan Musial Tour of St. Louis - A Goodbye to Stan the Man

And now, Governor Jay Nixon is getting his two cents in with a press release and a letter urging Illinois Governor Pat Quinn, to join him in a "united effort" to recognize Musial with the bridge.

Here's what Brooke Anderson, spokeswoman for Quinn, says, in an e-mail to Daily RFT:

Governor Quinn and Governor Nixon are working closely together to build this bridge. They will work together on the naming of the bridge as well.

She notes that the two will be collaborating on other key transportation issues as well like a high-speed rail.

(The two Democratic governors have also traveled together to Afghanistan).

Anderson's statement, however, doesn't exactly make the direct pledge that Nixon requests in his letter, which was sent to reporters yesterday afternoon. Nixon writes, in part:

How can we in Missouri and Illinois memorialize a man so beloved by baseball fans that he was voted as "favorite player" in a poll of Cubs fans one year ... a man whose lifetimes as a philanthropist and goodwill ambassador was recognized with the Presidential Medal of Freedom in 2011 ... a Hall of Famer deemed "baseball's perfect warrior, baseball's perfect knight" by Commissioner Frick?

I propose that we honor Stan Musial by attaching his name to the new Mississippi River bridge that is being built to connect our two great states at St. Louis. The Stan Musial Memorial Bridge would do honor to the citizens of both Missouri and Illinois, demonstrating that his greatness both on and off the field was something to be admired and emulated.

Governor, I will make every effort so that Missouri and Illinois come to a consensus under the terms of the 2008 Bi-State Agreement on naming this new bridge in honor of Stan Musiual, and I ask that you undertake these efforts as well. I hope that we find concord, and success, on this endeavor to honor a truly great American in this fashion.

If that letter doesn't satisfy your desire to hear government officials pontificating on the passing of Stan the Man, don't worry -- we've got you covered.

Continue for a sampling of goodies from Daily RFT's inbox yesterday followed by Nixon's full letter to Quinn.

WASHINGTON - U.S. Senator Claire McCaskill is introducing legislation that would name the new I-70 bridge over the Mississippi River in St. Louis--which is currently being constructed and will span Missouri and Illinois--the "Stan Musial Memorial Bridge," to honor the legacy of the St. Louis Cardinals baseball great.

"Stan Musial found a way to be an even better man and community member than he was a baseball player--and that's no easy feat when you're one of the all-time greats," McCaskill said. "He brought so much to St. Louis. I'm happy to find a small way to honor him and his family."

McCaskill will introduce the bridge-naming measure with Senator Dick Durbin of Illinois.

In 2010, McCaskill led a bi-state Congressional delegation in encouraging President Obama to consider Musial for the Presidential Medal of Freedom--an honor he received on February 15, 2011.

The Presidential Medal of Freedom recognizes those who have made an "especially meritorious contribution to the security or national interests of the United States, world peace, cultural or other significant public or private endeavors." The award was first given by President Harry S. Truman in 1945 to honor civilian service, and was revived in 1963 by President John F. Kennedy.