How is the City of St. Louis spending taxpayer dollars?

It's can be challenging to to answer that question -- at least according to a new report from an organization that has given St. Louis a failing grade for budget transparency and accountability.

Missouri's Public Interest Research Group, or the MoPIRG Foundation, released a report yesterday on the transparency of government spending -- based on its research around accountability and accessibility of city budgets across the country.

"An 'F' means there is very little information beyond the basic data in the budget," says Alec Sprague, a field organizer with the group. "If you look at the failing cities, the major theme is citizens are being kept in the dark on what companies and nonprofits are receiving taxpayer funds." 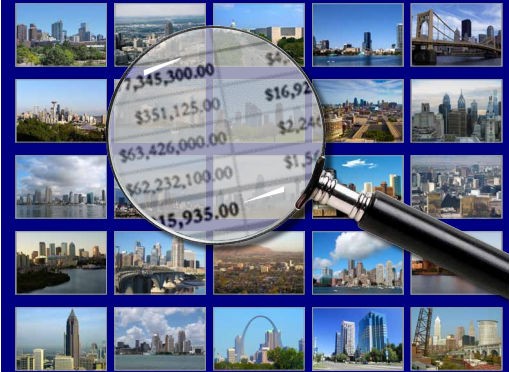 He adds, "We believe that the ability to see how government is using taxpayer money is fundamental to democracy."

Kansas City, the other Missouri city graded in the report, received a "C."

Much of MoPIRG's research focuses on what information is available through the government websites -- and how easy it is for members of the public to access and browse spending data.

Sprague says that St. Louis is essentially offering the bare minimum and could make great improvements in data transparency.

"St. Louis didn't receive a zero. It does provide some information," he says.

But if you look at the website of a comprable city, there are clear models for how St. Louis could upgrade, he says, pointing to Cincinnati as a good example. Cincinnati, he says, has a user-friendly system that is easy to navigate with searchable databases and drop-down menus.

MoPIRG is advocating that cities adopt "checkbook-level data" that should be searchable and downloadable and that cities should provide web visitors with copies of its contracts with vendors. In addition, the group recommends that cities disclose tax subsidies awarded to companies and recipients.

"Some cities have done a really good job making it user-friendly to find [information]," he says, "while others have lagged behind. St. Louis is one of the ones lagging."

Continue for response from St. Louis officials and for the full report.

Sprague points out that even some members of the St. Louis City Board of Aldermen find it difficult to navigate budget information, which is important to their decision-making. The group's news release offers this quote from Scott Ogilvie, Alderman for the 24th Ward: "I hear from many Saint Louis residents that they are expecting a higher level of technology integrated into the services that the city provides. We have tremendous potential for improvement in many of these areas."

Paul Payne, the city's budget director, tells Daily RFT that he has not yet seen the report, but adds, "All of our budget documents are available online as well as our financial reports."

More from our Politics archive: "Maria Chappelle-Nadal's Gun Proposal: Parents Must Notify Schools If They Own Firearms"