Here's one way to make a scene: Lock yourself to a 500-pound potted plant inside a corporate building as others dance and sing loudly in the lobby. That's exactly what a group of activists did yesterday inside the Arch Coal headquarters in Creve Coeur. And the demonstration -- aimed at drawing attention to the impacts of coal corporations -- was disruptive enough that seven protesters were eventually arrested inside the building.

Prior to getting handcuffed the protestors released a flotilla of helium balloons inside the building's lobby. A sign dangling from the balloons read: "Your coal company kills."

"We need to escalate [our protests], because we need to win," says Arielle Klagsbrun, an organizer with Missourians Organizing for Reform and Empowerment, or MORE.

In response, Arch Coal reps says that it respects the activists' right to protest -- and adds that coal is great for the U.S. economy.

Here's video from the demonstration.

"Seven people entered the Arch building and occupied space...blockading themselves and locking themselves to a 500-pound concrete potted plant," says Klagsbrun, who was at the demonstration but did not get arrested. "Interrupting business as usual."

MORE and an organization called Radical Action for Mountain Peoples' Survival, or RAMPS, organized the demonstration against Arch Coal, which is the second largest company of its kind in the U.S. and operates strip mines in Appalachia and other coal basins. The groups argue that strip mining is destructive and toxic and disproportionately impacts disadvantaged communities. 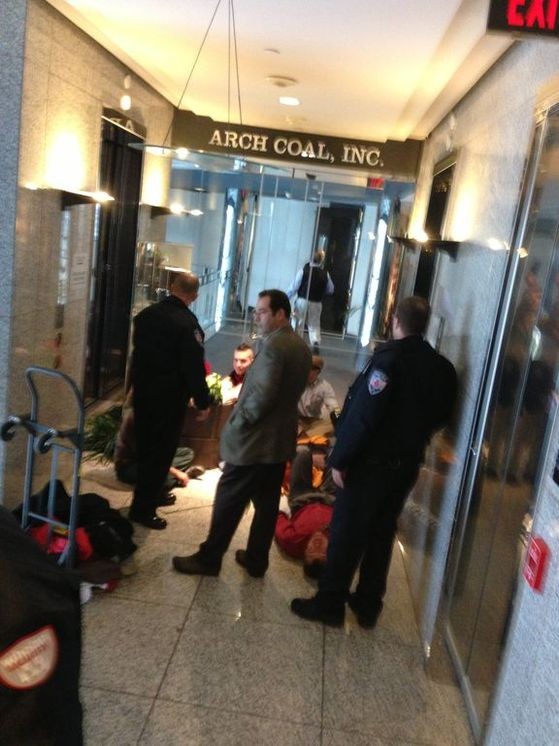 "I think the message came across," says Klagsburn, noting the "Your Coal Company Kills" sign the demonstrators brought inside via balloon. "It was clear why people were there."

Each arrested demonstrator's bail was set at $1,000.

Continue for more details on the demonstration and response from Arch Coal.

Klagsburn says that the demonstrators were on scene both to raise awareness about the negative environmental consequences of coal as well as labor rights concerns.

"They are actively trying to squelch resistance," she says, adding, "Arch is a huge proponent of climate change."

Kim Link, a spokeswoman for Arch Coal Inc., passes along this statement to Daily RFT:

We respect their right to protest peacefully on public property.

Coal creates affordable energy around the world and thousands of jobs here in the U.S. Arch is committed to providing responsible energy that powers the working world and meets the stringent environmental standards of U.S. regulators.

Here's the full news release from the anti-coal groups, followed by more photos from the demonstration.

CREVE COEUR, MO -- Seven protesters affiliated with the RAMPS campaign (Radical Action for Mountain Peoples' Survival), MORE (Missourians Organizing for Reform and Empowerment) and Mountain Justice are locked down to a 500-pound small potted tree in Arch Coal's third-floor headquarters while a larger group is in the lobby performing a song and dance. Additionally, a helium balloon banner with the message "John Eaves Your Coal Company Kills", directed at the Arch Coal CEO was released in the Arch Coal headquarters.

"We're here to halt Arch's operations for as long as we can. These coal corporations do not answer to communities, they only consume them. We're here to resist their unchecked power," explained Margaret Fetzer, one of the protestors.

Arch Coal, the second largest coal company in the U.S., operates strip mines in Appalachia and in other U.S. coal basins. Strip mining is an acutely destructive and toxic method of mining coal, and resource extraction disproportionately impacts marginalized communities.

"From the Battle of Blair Mountain to the current fight with the Patriot pensions, the people of central Appalachia have been fighting against the coal companies for the past 125 years. The struggle continues today as we take action to hold Arch Coal and other coal companies accountable for the damage that they do to people and communities in Appalachia and around the world. Coal mining disproportionately impacts indigenous peoples, and we stand in solidarity with disenfranchised people everywhere," Dustin Steele of Mingo County, W.Va. said. Steele was one of the people locked in Arch's office.

Mingo County is representative of the public health crisis faced by communities overburdened by strip mining. A recent study of life expectancies placed Mingo County in the bottom 1 percent out of 3,147 counties nationwide.(1)

Arch's strip mines not only poison communities, but also seek to erase the legacy of resistance to the coal companies in Appalachia. Arch's Adkins Fork Surface Mine is threatening to blast away Blair Mountain--the site of the second largest uprising in U.S. history and a milestone in the long-standing struggle between Appalachians and the coal companies.(2)

The devastation of Arch's strip mines plague regions beyond Appalachia. Arch's operation in the Powder River Basin is the "single largest coal mining complex in the world.(3)" Producing 15 percent of the U.S. coal supply, Arch is a major culprit of the climate crisis. 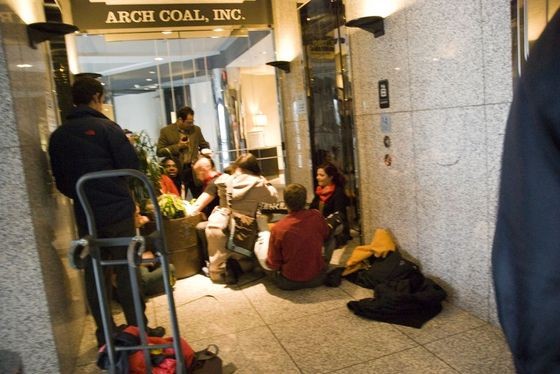 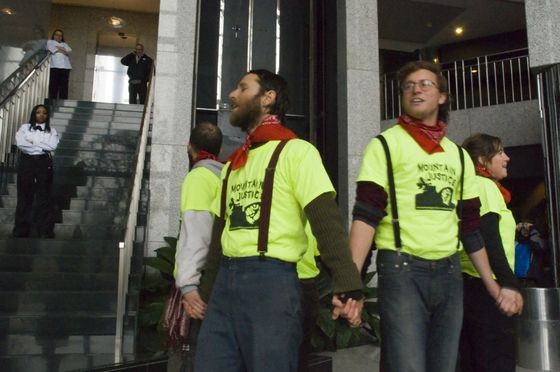