This Thursday, Pay Your Last Respects to Stan Musial 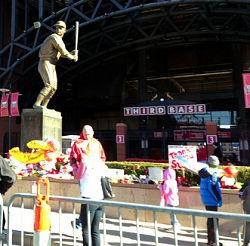 Thursday afternoon and evening, from 2 to 8 p.m., you'll be able to pay your respects to the late, great Stan Musial at the Cathedral Basilica of St. Louis, the Cardinals announced yesterday.

The funeral will also be at the Cathedral Basilica on Saturday morning at 11 a.m., followed by a procession to Busch Stadium, where Musial's family will lay a wreath at the base of his statue.

Information about the route of the procession to follow.

The family has requested that, instead of flowers, mourners send donations to Covenant House, a shelter for homeless teenagers of which Stan and his wife Lil were longtime supporters.

What else is there to say? Except this:

Even Cubs Nation has offered its condolences from its headquarters at Murphy's Bleachers, across the street from Wrigley Field. (See? We're really not so bad.)