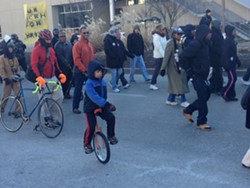 This may win the award for most creative -- and exhausting -- way to honor Martin Luther King, Jr. Eight-year-old Finn Mateo McNamee marched in the St. Louis MLK parade yesterday in the frigid cold alongside thousands of other supporters. Though he may be short, he definitely stood out. That's because McNamee rode a unicycle the entire way, weaving in and out of the crowd, dodging people and sometimes cars as he marched on one wheel.

"It feels like you are flying," he told Daily RFT before speeding ahead.

His mother, Carolyn Griffeth, said that celebrating Martin Luther King Jr. was important to her -- and if her son wanted to do so on a unicycle, that was fine with her.

"There's still a civil rights struggle," said Griffeth, 40, who was featured in our 2007 feature "Cool to be Kind," about a growing Catholic Worker community in St. Louis. "It's about the rights of immigrants. It's about the rights of gay and lesbian people, and I want to be part of that. And I want to look back and celebrate all the people that did so much to move our country in the right direction." 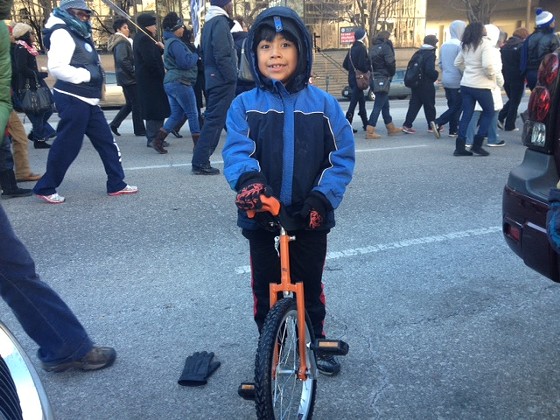 She added, "We are here to connect the civil rights movements of today to what Martin Luther King...and everyone else did before us."

And why on unicycle?

"It was his idea," she said, noting that he got his own unicycle for Christmas this year. "You're not gonna find any eight-year-old anywhere who can ride a unicycle like that. It's not easy at all."

It's not just sport for McNamee, who has been unicycling for about a year. He is a performer in a current City Museum production called Circus Harmony: Capriccio.

McNamee says there's one thing that makes it difficult to unicycle in a parade: "It's hard going slow."

Continue for more photos of Finn McNamee in the parade.