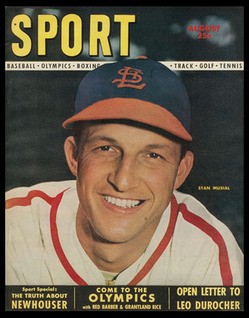 It's been a tough day for baseball.

Earlier today, it was reported that St. Louis native, notorious firebrand and legendary Baltimore Orioles manager Earl Weaver passed away on a cruise.

Now comes word that just hours ago, Stan "The Man" Musial passed away at his home in Ladue, surrounded by family.

Musial's health had been declining for some time, largely as a consequence of Alzheimer's disease. His family was able to gather ahead of time to say goodbye.

His grandson, Brian Musial Schwarze, sent out the following just a few minutes ago:

Stan the Man passed peacefully at home at 5:45 pm tonight of natural causes. Life will never be the same without baseball's perfect knight.

Widely considered one of the greatest players in baseball history, Musial spent all 22 seasons of his illustrious career with the Cardinals. He hit 475 home runs, won the National League's Most Valuable Player Award three times and helped lead the Redbirds to three World Championships. After his retirement in 1963, he became vice president of the club and then the team's general manager. He ran a restaurant, briefly became Lyndon Johnson's fitness advisor and was a damn fine harmonica player:

Update: Mayor Francis Slay pens his own remembrance and announces that flags will fly at half staff in Musial's honor at city buildings:

St. Louis has lost not just baseball's "perfect knight" but also its own favorite son.

No figure in St. Louis history has been more greatly or deeply admired than Stan Musial. None has brought more joy to more citizens over more years. None will be more widely and deeply mourned.

There's hardly been a child born in this city since 1930 who doesn't know to whom the No. 6 belongs. It belongs to The Man -- and what a good man he was.

I have ordered that the flags be lowered to half staff at all city buildings and facilities to honor Stan Musial and to mourn his passing.

On behalf of generations of St. Louisans, Kim and I express our heartfelt sympathies to the Musial family

St. Louis dreaded the coming of this day. It has come. We will miss Stan Musial terribly.

Here's the remembrance sent out by the Cardinals:

ST. LOUIS, January 19, 2013 - The entire St. Louis Cardinals family is deeply saddened by the passing of Cardinals Hall of Famer Stan Musial at the age of 92. Musial, who played his entire 22-year major league career (1941-63) for the Cardinals, died this evening at his home in Ladue surrounded by his family.

"We have lost the most beloved member of the Cardinals family," said William DeWitt Jr., Chairman of the St. Louis Cardinals. "Stan Musial was the greatest player in Cardinals history and one of the best players in the history of baseball." "The entire Cardinals organization extends its sincere condolences to Stan's family, including his children Richard, Gerry, Janet and Jean, as well as his eleven grandchildren and twelve great grandchildren," DeWitt said. "We join fans everywhere in mourning the loss of our dear friend and reflect on how fortunate we all are to have known 'Stan the Man'."

Musial was the first player in Cardinals history to have his uniform number retired, and he was a first-ballot Hall of Fame selection in 1969, being named on 93 percent of the ballots. At his retirement ceremony at the end of the 1963 season, Musial was referred to as "baseball's perfect warrior, baseball's perfect knight" by Commissioner Ford C. Frick. Frick's words are inscribed at the base of a bronze statue of Musial that stands outside Busch Stadium. The now iconic statute, which sits on Musial Plaza along Stan Musial Drive, serves as a popular, almost hallowed, gathering spot for generations of Cardinals fans.

Musial, who was born in Donora, Pennsylvania, signed with the Cardinals in 1938 and made his major league debut with the team in 1941. Musial was a member of the Cardinals teams that won the World Series in 1942, 1944 and 1946. He missed the entire 1945 season to serve in the United States Navy during World War II. Musial was named a Cardinals' vice president at the end of his playing career in 1963 and he served in that capacity for more than 25 years. In 1967, Stan served as the general manager of the Cardinals team that defeated the Boston Red Sox to win the World Series.

A resident of St. Louis from the beginning of his major league career until his death, Musial was actively engaged in business, civic and charitable work in the St. Louis community. He was co-owner of the popular "Stan Musial and Biggie's Restaurant" in St. Louis for more than two decades and he was active with numerous charities including the USO, Senior Olympics, the Boy Scouts, the Crippled Society of St. Louis, Covenant House and Cardinals Care. "Stan was a true civic treasure, who did so much for our community," Dewitt said.

In 2012, the St. Louis Sports Commission announced that National Sportsmanship Awards will be renamed "The Musial Awards" in recognition of his status as an exemplary role model for athletes. During Musial's entire major league playing career he was never ejected from a game by an umpire - a mark of both extraordinary self-discipline and sportsmanship. Musial served as chair of the President's Council on Physical Fitness and Sports for President Lyndon B. Johnson from 1964-67 and he served as unofficial emissary to Poland and was awarded the Cavalier Cross of the Order of Merit, the Polish government's highest civilian honor.

In 2010 Musial was named a recipient of the Presidential Medal of Freedom, receiving the medal from President Barack Obama at a White House ceremony in 2011. Considered the highest civilian honor bestowed by the U.S. government, the Medal of Freedom recognizes individuals who have made an "especially meritorious contribution to the security or national interests of the United States, world peace, cultural or other significant public or private endeavors." Awarding the Medal to Musial at the 2011 ceremony, President Obama said, "Stan remains to this day an icon untarnished, a beloved pillar of the community, a gentleman you'd want your kids to emulate."

Musial's wife of 71 years, the former Lillian "Lil" Labash, passed away in May 2012. Funeral arrangements have not yet been finalized. In lieu of flowers, the family asks that donations be made to Covenant House or charity of the fan's choice in the name of Stan Musial. The Cardinals have set up a memorial site around the Musial Statute at Gate 3 at Busch Stadium, which will remain in place until a date yet determined. The team has also set up a web page to pay tribute to Stan and allow fans to offer condolences to the family.