"Sugar Babies" Seeking "Sugar Daddies" on the Rise at University of Missouri-St. Louis 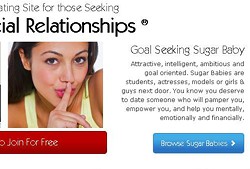 It's not an awesome time to be in college. We've got $1 trillion in student debt in this country and there's no longer any guarantee of a job on the other side of graduation.

Know what makes this a real American tragedy? Some of these kids are women who are hot. Where's the justice in that? Won't somebody please think of the coeds?

"We had a slow-recovering economy and on top of that, increasing tuition costs and cost of living have greatly affected these women," says Leroy Velasquez, PR manager for the site.

For these reasons and more, according Velasquez, the website had a banner year in 2012 for college women signing up to become "sugar babies" in search of a "sugar daddy." And one local campus had a bumper crop of babies.

In 2012, 72 young ladies from the University of Missouri-St. Louis signed up to become sugar babies. That represents a 218 percent increase in membership, according to a company press release and makes UMSL a "Fastest Growing Sugar Baby School."

In case you're wondering, the website builds profiles for young women who want an older, financially secure man to...supplement their incomes with a monthly stipend. Women post pictures and personal stats, as well as their "expected" monthly income. Men post profiles that include how much they're willing to spend.

Velasquez says the site has 2 million users worldwide, 44 percent of whom are college students. He says babies outnumber daddies by about 12 to 1. (There are "sugar mommies" and "male sugar babies" on the site as well.)

"We do not condone prostitution of any form. It's explicitly stated on our website," Velasquez interrupts. "It's essentially people engaging in mutually beneficial relationships: two people coming together and being honest and upfront with one another to say what they are seeking in this relationship."

It's not explicitly about sex, he says. Sugar daddies provide financial peace of mind, companionship -- even "mentorship."

So that's what the kids are calling it these days!