Two dudes in their mid-twenties have been charged with breaking into the home of Rams tight-ends coach Rob Boras and stealing electronics, video games and jewelry -- jewelry that included Boras' NFC Championship ring and three gold NCAA rings.

The crooks have been arrested, but the rings are still nowhere to be found, Kirkwood cops say.

Here's what happened, according to police: At 1:28 pm on New Year's Eve, Boras' neighbors on Girard Place in Kirkwood saw a pair of guys carrying a TV out of the coach's house, so they called 911. The burglars --  apparently aware they'd been caught red-handed -- dropped the TV and sped off in a white vehicle. 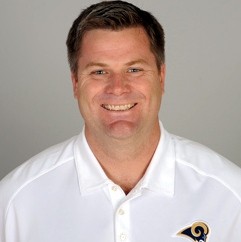 Bright and Medcalf reportedly confessed to the authorities that they'd stolen the rings and re-sold them to Missouri Gold Buyers.

However, when the cops questioned people at that business, they got "conflicting reports" and left empty-handed.

The two thieves coughed up info on the rest of the loot, which proved more fruitful: They told cops they'd stashed some of the other jewelry in the woods near Manchester and Barrett Station roads. The cops were able to recover that jewelry.

Police also recovered most of the video games, which had been traded for cash at gaming stores in and around West County Mall and South County Mall.

As for Boras, here's his CV as summarized on the Rams' site:

Now, the release sent out by Kirkwood police stated that Boras' "NFL Championship" ring was stolen. None of the teams above won a Superbowl during his tenure. However, the Bears won the NFC championship while he was there in 2006 (and then lost in the Superbowl). Therefore, I assume that the missing ring is actuallly his NFC championship ring (see below). If I find out more, I'll update this post.