The Tigers Without Their Big Man 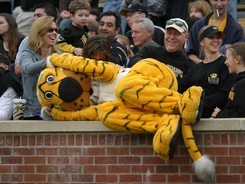 At the moment, it looks like good news for the Missouri Tigers and Laurence Bowers, the all-everything power forward who has done as much as anyone could have hoped -- and probably more -- to help get the Tigers where they are right now.
Phil Pressey came down on Bowers' knee during the win over Alabama, and there was a moment of raw panic throughout the land. (Or at least the tiny fraction of the land that happens to be big MU basketball fans.) We saw the team play last season without Bowers after a knee injury sidelined him in preseason; visions of playing the rest of the way this year danced through the heads of Mizzou fans everywhere.
Fortunately, it looks, for now, as if the injury isn't serious. A sprain, nothing more. Still, considering what the Tigers are going to look like if the biggest of their daunting collection of big men misses any significant time is a very interesting question indeed.
Two games, approximately. That's how long Bowers is expected to definitely be out. Two games, long enough to miss the upcoming contest at Ole Miss this weekend, and the game against Georgia on the 16th. The hope is that the talented forward can return in time for the Tigers to travel to Florida, a game that just might be the toughest in-conference test this team will face this year.
Still, a week and a half is an awfully short turnaround, and while it isn't unthinkable that Bowers could be on the floor in Florida, it also isn't unthinkable that he may take a while longer to get back up to full speed. (And, more importantly to his personal game, full strength.) At the very least, it's easy to imagine the Tigers having to limit Bowers' time on the hardwood out of the gate.
So what does this Mizzou team without Laurence Bowers look like? Not bad, actually. Although, I have to say it's certainly a different team without him.
Bowers has been the leading scorer for Missouri this season, averaging just under 17 points a night for Frank Haith. (16.8, to be exact) Perhaps more importantly, he's also pulling down nearly seven rebounds per contest. Perhaps even more importantly than that, Bowers is really the player most responsible for the identity of this team. Last year's squad belonged to the guards, to the Pressey brothers and Marcus Denmon. It was the fastest, most runningest, most undersizedest, most shootingest bunch of players you ever did see.
This year, it's been a completely different team, and different identity, for the Tigers. Sure, Phil Pressey is still the guy running the show, the guy with the ball in his hands, but the real anchor of the team has been Bowers. He's big, he's physical, and what he has done establishing a presence in the paint has been the defining characteristic of this team. Alex Oriakhi has been brilliant, even more of a rebound machine than Bowers, but it's been the push-pull dynamic between those players that has allowed Oriakhi to do what he's done. Bowers is the guy who makes the space down low, using his physicality to take over the post, allowing Oriakhi to have the space to operate.
That's what is perhaps the most worrisome, frightening thing about this injury to me. Not the missed time; this is a team with more than enough talent to limp along for a few games without their best player. But what if Bowers comes back, and that knee just isn't stable enough, strong enough, to allow him to do what he's done all year up until now? You can't have a pillar with a weakened base, not if you want it to bear much of a load.
For now, Oriakhi will be expected to step up, and I expect he'll do well enough. He doesn't have the kind of raw physicality Bowers does to clear space in the paint, but he has plenty of size and length to make his presence felt.
The Tigers would also benefit hugely from the return of Tony Criswell, if there's any way he could get back on the floor soon. At a true 6'9" and 240 pounds, Criswell is another big body on this Mizzou roster, and could go a long way toward filling in for Bowers' sheer tough factor.
The biggest wild card of the bunch for me, and the player I would most like to see utilized a bit more, is Stefan Jankovic, the team's talented freshman forward. Jankovic has seen relatively limited minutes this season, averaging 10.5 per game, which is probably right where a player of such youth should be when he isn't either a one and done bonus baby or on a team in a brutal situation. Still, in a case like this, sometimes you just have to step up, and of all the guys with potential to help fill in for Bowers, Jankovic is easily the one who brings the most intriguing, dynamic package of skills to the table. A team with more Jankovic and less Bowers would look different; much more finesse and far less of the attitude this squad has established, but that doesn't necessarily have to be a bad thing.
In the end, if Bowers really only misses the next two games -- and is able to play at near full strength upon returning -- the impact on this Mizzou season shouldn't be huge. If this ends up a lingering problem, though...that's much more of a concern. If that proves to be the case, we could very well end up seeing a Tiger team floundering for a while, trying to recapture and/or redefine an identity which has, to this point, largely been carried on the shoulders of their biggest big man, the one with the brace on his knee. Oh, and the one who now has an injury to the other knee.