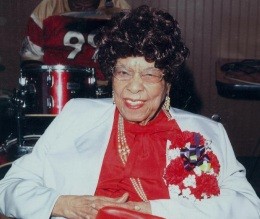 That made her the oldest person living in Illinois, and also one of our nation's elite supercentenarians (meaning she was at least 110 and a superhero).

Epps was born in April of 1901. It's hard to get your head around that.

Arkansas was her birthplace, but had she been born in St. Louis, she could've had a childhood memory of the 1904 World's Fair.

Here's another St. Louis-centric way to think about it:


Remember that 2008 presidential election meme, Things That are Younger Than John McCain (featuring items such as the Golden Gate Bridge, Mount Rushmore, penicillin and the statehood of Alaska and Hawaii)? Mayetta Epps-Miller was born before both of John McCain's parents.

Back in 2005 Epps-Miller gave an interview to the Post-Dispatch in which she dispensed some advice for those seeking longevity.

She did say she never smoked and only rarely drank, but here are the tips she gave, broken down into a list:

7) Love the Lord, because the Lord loves you.

5) Give part of your earnings to somebody's church.


How many of you have violated all of these principles so far this year? So far this morning?