Two Twenty-Somethings in Godfrey Caught With Lots of Drugs 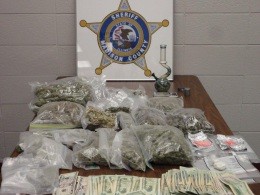 Investigators at the Madison County Sheriff's Office say they got tipped off on Friday about a big ol' stash of drugs at 2704 Queen Street in Godfrey.

So they secured a search warrant and visited the residence. Sure enough, they found


Take a gander at the photo! That stuff would've made for quite a New Year's Eve, had it been recreational. To the deputies, however, it appeared more entrepreneurial.

Total street value of the drugs was estimated at $22,000.

Police have arrested William A. Noe, 25, and his girlfriend, Ashley A. Welch, age 22 They live in the basement of the residence, deputies are reporting.

Bond was set at half a million dollars for each defendant.