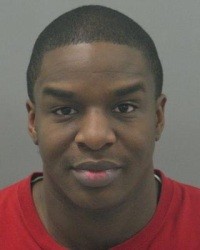 A downtown resident was charged today with robbing a South City bank.

Cameron Harral, a 31-year-old from the 1600 block of Locust Street downtown, faces one count of first-degree robbery for the incident that happened on Dec. 31 in the Lindenwood Park neighborhood.

According to court records, Harral walked into the First Community Credit Union at 4249 Watson Road at 12:30 pm on Monday. (This was caught on surveillance cameras, by the way.)

Harral handed a teller a noted that said:


The teller handed back the note and gave Harral the cash, but the bills had a tracking device.

Not long after Harral left the credit union in a silver Dodge Magnum, police spotted the vehicle on Hampton.

The vehicle sped away but got trapped in a dead-end in the 2600 block of Tamm Avenue.

Police arrested Harral, then recovered the money and the note.