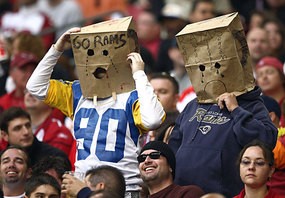 I didn't expect this game to be close. I really didn't. In fact, I said as much yesterday when I gave out what I saw as the three keys to a Rams win. I thought Seattle was too hot, and too good, and the Rams were going to end a promising, rewarding campaign with an ugly afternoon in the Pacific Northwest.
Instead, I was pleasantly surprised by the tenacity of the Ram defense, and the team as a whole. Actually, scratch that; I was more than pleasantly surprised. I was impressed. Very impressed, in fact.
Unfortunately, impressive or not, the final score still tilted in favor of the Seahawks, and the Rams' 2012 season did, ultimately, end in a loss. Reviewing the keys after the break.
Key #1: The Field of Play
The Rams had to find some way of keeping the Seattle crowd from overwhelming them, and they managed the feat nicely. A team which has struggled all season with slow starts out of the box came out guns blazing -- well, sort of -- and put the Seahawks back on their heels. The crowd noise never became the kind of factor we've seen it be in the past -- and how I expected it to be yesterday -- even toward the end of the game when Seattle took the lead. It got loud, certainly, but the Rams never seemed to get rattled by the atmosphere, which they could easily have done.
Full credit to the Ram defense for putting the Seahawks on their heels, giving them that metaphorical punch in the mouth, early on, setting the tone and preventing things from getting crazy out of the gate. The offense...not so much. But, they moved the ball, and didn't seem excessively intimidated by the noise level. So partial credit there, too.
Key #2: Keeping Russell Wilson in Check
This, to me, is the toughest bit of trying to evaluate and grade the Rams' performance yesterday. The defense, particularly the front seven, and especially particularly the defensive ends (read: Chris Long), were outstanding. All afternoon, they hassled Wilson, pressured Wilson, and still managed to keep him bottled up in the backfield. The kid is a dynamic talent, to be sure, and he still managed to make his plays -- his passing accuracy on the day was remarkable -- but the Rams mostly kept him on his side of the line of scrimmage, scrambling to buy time and survive rather than gashing chunks of yardage out of the Rams' collective hide.
But -- and isn't there always a but?
But, in the end, the game really hinged on Russell Wilson making a couple of very, very big plays, long completions down the field on busted plays. The secondary blew several coverages, allowing receivers to come open and Wilson to make the throw downfield once he managed to slip out of the pressure. The real dagger was the long completion to Golden Tate late in the game on a critical third down, when the Ram D-line had Wilson dead to rights in the backfield, only to watch him wriggle, wiggle, and escape his way into a 50 yard pass play that broke the Rams' backs.
It was mostly a stellar showing by the defense. They did exactly what they needed to do all day, containing Wilson and preventing him from running rampant. But, just as is always the biggest danger with a quarterback of his ilk -- aka the Michael Vick school of quarterbacking -- he managed to take one or two busted plays, turn them into big gains, and beat the Rams all the same. Six sacks = awesome. Fifty yard completion on third down = heartbreaking.
Still, if the offense could have managed more than thirteen measly points...
Key #3: 'Roid Rage
I'm going to say it right now: the Rams outphysicaled the Seahawks.
The Seattle defense is a bruiser, no doubt about it. They beat up the 49ers, one of the most physical teams in the game, in Week 16, and have made a habit of stomping their opponents into the ground, winning largely on the strength of their sheer physicality. And the Rams outpaced that intensity level.
I honestly have no caveat here. The Rams played like the bully yesterday, and it was a beautiful thing to see. They went into a hostile environment, one of the most hostile in all of sports, in fact, and pushed their level of intensity beyond that of an insanely intense, physical team. Magnificent.
Honestly, the Rams played one of their best games of the season yesterday. They did virtually everything right. Unfortunately, the offense is still underpowered, and Seattle really is an exceptionally good team right now. It was one of the best games the Rams have played all season, and they still lost. Still, despite the final score, I'll say it again: I was impressed.