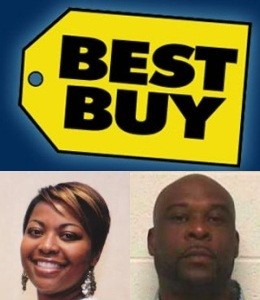 Back on December 19, police in Fairview Heights responded to a "battery" call from the Best Buy at 26 Plaza Drive. Little did they know an upstanding civic leader was involved (and by "upstanding," I mean "childish hothead").

When officers arrived at about 12:45 pm, they learned that two customers in the store -- a male and female -- had approached the exit doors with an item.

So, following protocol in a way that's familiar to anybody that frequents Best Buy, a "loss prevention officer" (the anti-shoplifting door-guy) asked them to produce a receipt.

She shouted obscenities at the male employee, who was 61 years old. Her companion "struck him in the face with an open hand," causing him to fall to the ground. (Was it a bitch slap? Was it a face shove? Not sure.) Then, as the employee lay on the ground, the woman stood over him and continued to shout cuss words at him.

This charming lady, it turns out, was none other than East St. Louis Councilwoman Latoya N. Greenwood, 38, whose listed address is on the 2700 block of McCasland in East Boogie. She was cited for disorderly conduct, a Class C misdemeanor.

Her companion's name was Hickey Thompson, 39, whose listed address is the same as Greenwood's. He was taken to jail and charged with aggravated battery, a felony.