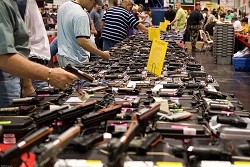 State Rep. Stacey Newman (D-Richmond Heights) announced today that she will file legislation in January aimed at closing Missouri's "Gun Show Loophole" that allows for the sale of weapons without background checks.

"After the recent horrific massacre at Sandy Hook Elementary School in Connecticut, we must ensure that all firearms purchases, regardless of where they are sold, include the same comprehensive background checks as required for licensed firearm dealers," said Newman in a statement.

Current federal law only requires background checks on for guns sold through licensed firearm dealers, allowing private dealers to sell arms without a license and without processing any paperwork. As a result, it's believed that two out of every five guns sold in America change hands without a thorough check of the buyer.

"Stopping gun sales to those who should not be permitted to buy firearms (including the mentally ill), will prevent future senseless gun violence," said Newman. "181 school shootings have occurred since Columbine in 1999. We cannot sit idly by and wait for a similar tragedy in Missouri. Doing nothing is no longer an option."

If passed, which seems unlikely given that it has been estimated that 40 percent Jefferson City lawmakers pack heat inside the Capitol, Missouri would become the 18th state in the nation that requires background checks at gun shows.