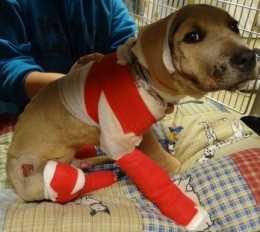 A woman has been charged for her involvement in that terrible episode on November 21 in which a puppy tethered to a truck was dragged along I-55 for about a mile.

As it turns out, the ex-wife of the driver of the truck was responsible. And it appears she did not intend for this to happen.


Media coverage so far indicates that the driver, Victor Washington, had given the puppy to his ex-wife's young daughter. Johnson decided she didn't want to keep it and wanted to give it back. But Washington showed no interest in taking the dog in.

So Johnson had her son tie the pit bull mix to the hitch on Washington's truck on the night of November 20.

The next morning, Washington didn't see the dog tied to his truck when he drove off. Another motorist flagged him down, and that's when he discovered what had occurred.

The Humane Society says that the dog, nicknamed "Trooper" by his rescuers, is still recovering. They plan to wait until the threat of infection subsides before they make him available for adoption.