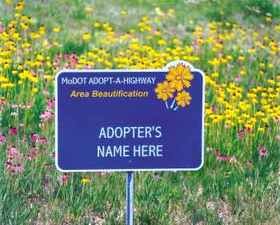 "9/11-Truthers" believe a lot of things that make most of us deeply uncomfortable. But at least we'll get a cleaner highway out of their latest publicity stunt.

The Missouri Department of Transportation has reluctantly approved a local 9/11 Truth group's application to adopt a stretch of Olive Boulevard in Creve Coeur. 9/11 Truth is a pretty out-there movement of people who believe 9/11 was an elaborate hoax orchestrated by the United States government or its Zionist cohorts. Their two modestly-sized signs go up next month, according to a MoDOT spokesperson.

But MoDOT has had some mo' problems with its Adopt-A-Highway program--which invites groups of volunteers to keep a highway free of litter in exchange for a small road sign bearing their name--over the years.

In 2000, MoDOT unsuccessfully fought to prevent the Missouri Knights of the Ku Klux Klan from participating in the program. RFT's former publisher Ray Hartmann wrote about the saga in an editorial called "In Defense of White-Trash Cleanup". The state may have been ordered to give over a half-mile of Interstate-55 to the Klan, but that didn't stop the legislature from voting to rename that stretch of highway "Rosa Parks Highway".

In 2009, a neo-Nazi group signed on to adopt half-a-mile outside Springfield. It didn't take the legislature and governor Jay Nixon long to rename the highway after the famous Jewish theologian and civil rights leader Abraham Joshua Heschel. Needless to say, the KKK and the National Socialist Movement were not amused by the tactic.

The latest entrant into MoDOT's tense fight between free speech and hate speech, organizes itself through meetup.com, a site that brings people with common interests and similar zipcodes together. The St. Louis 9/11 Questions Group describes itself thusly:

We are residents of the Greater St. Louis Area (and other areas) concerned about the many disturbing aspects of the 9/11 attacks and interested in finding out more about those events. We have many disagreements, but we agree that 9/11 is worth inquiring into. We are inclusive as opposed to exclusive. Generally, we believe that when gravity causes an object to move, the object goes down, not upwards and outwards in an arc.

They will take on the stretch of Olive Boulevard from Lindbergh to Old Bonhomme, which is officially called Highway 340. In exchange for four trash pick-ups a year, they'll get two signs recognizing their participation in the program at either end of their adopted roadway.

Tom Blair, an assistant district engineer for MoDOT, told the New York Daily News that the benefits of the Adopt-A-Highway program to taxpayers ultimately outweigh the uncomfortable questions about free speech that it raises.

"Well, I'm concerned about the attention, but we need the program," Blair said. "I'm concerned any time negative attention goes to the program, but it's a solid program and it's important to remember that. And anyone, whatever their motivations, can apply for it, as long as they just pick up the trash."

So, do we think the Missouri Legislature will take a stab at renaming this stretch of highway this time around? Perhaps the "Victims of 9/11 Memorial Highway"?