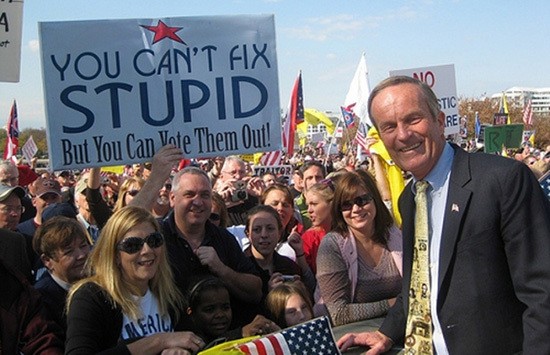 The Federal Election Commission released its post-general election report yesterday. All the giddy spending of election season has settled into the cold, harsh reality of paying for it all. Especially if you lost. It's as though post-Christmas gloom has come three weeks early!

The news is especially bad for Missouri's very own Todd Akin. Not only did he lose his Senate bid and will be unemployed come January when he has to give up his seat in the House of Representatives, he's also, as of November 26, the day he reported, $268,829 in debt, with just $54,499 in cash on hand.

Responsibility for paying the debts falls on Akin, writes Holly Robichaud, a Republican campaign consultant, on her website. Many candidates, she adds, try to make up their post-election debts by hitting up previous donors. Unfortunately for Akin, winners have an easier time raising money than losers. (Why would you want to continue to back a loser? she reasons.)

In Akin's world, if you go by his website, the election still hasn't happened. (Which means, sadly, that both the "Press" and "Mud" sections are bereft of his RFT cover.) There is still a link which you can click on to give. We won't know though, until his fourth quarterly report to the FEC, how much money he took in post-election.

Akin's in pretty good company, though. Claire McCaskill's $238,010 in debt, too, with just $8,762 cash on hand. President Obama's also in the hole, and Newt Gingrich owes a whopping $4,914,408 from his failed Presidential bid. John McCain, however, has complete paid off 2008, and while Mitt Romney has some debt, he has more than enough cash on hand to cover it.

And Richard Mourdock, the Indiana would-be Senator who was Akin's partner in infamy this year (he said that pregnancies resulting from rape were "a gift from God"), still owes $230,840.

We would also hearby like to nominated the FEC website as the best place to waste an afternoon.