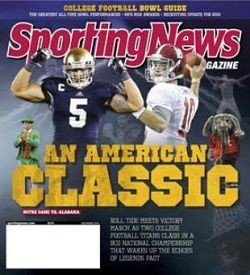 The Sporting News has never had a swimsuit issue. For most of the first century of its existence, it didn't even have color photography. Instead, it had box scores. Lots and lots of box scores. And a special section for participants in fantasy leagues.

Yes, TSN, founded in St. Louis in 1886 by the Spink brothers, a band of devout Browns fans (and father and uncles of J.G. Spink, the second-generation editor for whom baseball writing's most prestigious award was named), was for the hard core sports fans among us, the kind of guys -- and the vast majority of its readers were guys -- capable of spending hours studying stats and going over every bit of minutiae of the latest game.

In time, TSN developed a website and apps for phones and tablets so its devotees would never, ever be bereft of sporting news. And, as of January 1, that's all it will have. The print edition, the publication announced this week, will be shutting down production for good. The current edition will be its last.

The question is, if a magazine ceases publication and nobody cares, does it really matter?

The news does not exactly come as a surprise. "Want a good sign why the print publication is ceasing?" Will Leitch, the founding editor of Deadspin who, incidentally, began his professional career at TSN in the mid-90s, when it was still in St. Louis, writes on his blog.

How about this: I've been the front-of-the-book columnist for Sporting News for more than four years now -- I started a couple of weeks after I left Deadspin -- and I don't personally know a single person who knows that fact, outside my family and my editors there. I mean, no one has ever mentioned it to me, ever. The only people I've ever met who knew I was the columnist were people who personally emailed the address next to the column itself. Many of them people were in prison or currently, that second, in the dentist office. 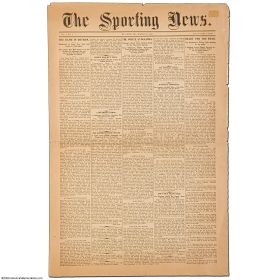 For Joe Schuster, a Webster university professor, journalist and author of the baseball novel The Might Have Been who used the TSN archives frequently when the magazine was still based in St. Louis, the magazine had simply outlived its usefulness.

"When TSN was in its heyday," he writes in an e-mail,

you really didn't have any other opportunities for comprehensive news, features and statistics in sports aside from TSN, and so it was a treat to have it show up in your mailbox every week, but now (sadly for those of us who still love print), you don't need TSN to tell you what's going on with Adam Wainwright's shoulder or what's the deal with Carlos Beltran's offensive slump.

Schuster did his mourning back in 2008 when the magazine -- and its amazing archives, second only to the Baseball Hall of Fame in Cooperstown, New York -- left town for Charlotte, North Carolina, home of its new corporate owner, American City Business Journals.

I still read PDFs of past issues of TSN online when I'm doing research and I often marvel at what an amazing publication it was in its prime when you'd find batting averages for players who never got beyond single A ball, when you'd find articles about teams in small towns in Idaho or South Carolina--teams that no one outside of a fifty mile radius of their ballparks would care about but TSN cared about them.

TSN was the Internet of the nineteenth and early twentieth centuries. Which is a pretty remarkable achievement. Think of the enormous network of reporters it must have had on the ground in order to compile that much information.

Don't get too nostalgic, though. You've got all that magic in your smartphone now. But if your heart is feeling a bit mushy, pay a visit to the Sporting News Lofts on Washington Avenue. Maybe, if you believe in such things, you can still sense the aura of baseball's Bible hovering in the air.