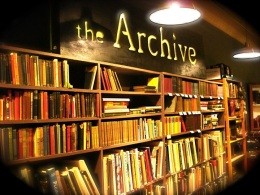 Because street-savvy crooks know there's no cash cow quite like a used book shop, The Archive bookstore at 2903 South Jefferson was burglarized earlier this week.

According to the city cops, it must've happened after 7:30 pm Monday, but before 2:25 pm Tuesday, at which point an employee arrived and felt that a few things seemed off inside the Benton Park West business.

First, co-owner Amber Dover tells Daily RFT, she noticed that a modem and other Internet equipment were all "meticulously unplugged."

Then she checked the cigar box near the cash register and saw the money was gone.

Suspecting a burglary, she found that a window in the southwest corner of the building had been broken, and that there were "large drops of blood" on the sill and on their framed business license nearby.

Yesterday, Dover and her co-owners (husband Tom Freeman and Steve Hoffman)  wrote on Facebook: "They only stole the cash and coins we use to make change. It was about the same amount as our electrical bill is each month, but it's still disheartening to lose what you've worked hard for."

In response to the burglary, The Archive has decided to do what all resilient businesses do: Have a sale! But not just a normal sale.

We're having an "Archive Holiday Robbery Sale." Prices so low, you'll feel like you're stealing from us...everybody else is! We're open Thursday, Friday, Saturday 2pm-8pm, and Sunday NOON-8pm. Come buy a book or two and help replenish the till. Everything in the store is 20% off for these four days only!* Bring your quarters, dimes, nickles, and pennies, we need those for the register! We appreciate your support!

*Discount excludes any consigned books or art that we don't own.


Daily RFT almost wishes the crook would've taken books instead, because that would imply one of two consoling truths: (1) The crook wanted to expand their knowledge, or (2) Books are so valued in our society that stealing and reselling them is worth getting cut by broken glass.

But no. The jerk took the coin. As for Daily RFT, we'll see you at the sale!