Six patrons of the Bridgeton location of Hotshots Sports Bar & Grill are suing the chain and its owner for discrimination.

While gathered at the bar to watch a Cardinals World Series game, the plaintiffs charge that they were essentially refused service because they are black. The weirdest part? The suit alleges the waitresses were outed as racist by their own manager.

We know what you're thinking. How could something go so awry at an establishment known for "School Girl Thursdays"? Well, here's how it allegedly went down.

The plaintiffs are made up of two separate parties. On October 22, 2011, Russell Green, Michael Shelton, Angela Millstone, and Michele Scott stopped by the Bridgeton location of Hotshots to watch game three of the World Series. A little later on, Leslie Deleon and Percy Green arrived together and took a seat at a nearby table (no relation to the famed civil rights leader Percy Green). Deleon, the Greens, and Shelton are African American. 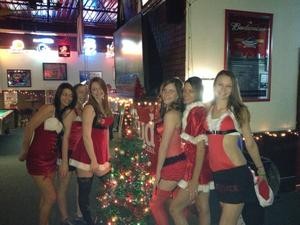 A precocious young lady called only "Server 1" initially breezed past both groups, while waiting on white customers. When she eventually came over, the suit alleges she was "rude and abrupt" to Green and Shelton. After waiting an extremely long time again, the first group started getting desperate, even behaving like they were "waving an airplane into an airport terminal." Server 1 allegedly continued to ignore them, sitting down to chat with a group of white customers. When Deleon became frustrated and tried waving her over, Server 1 allegedly ducked behind a pole.

When the first group complained to a manager, he replaced Server 1 with Server 2, though he did not see the point, supposedly remarking that Server 2 is "just as racist as the first one." When the second group also complained about Server 1, the same manager gestured to the first group and said he'd been dealing with the problem all night. The suit claims he told Deleon and Green that all the servers were "so racist here."

"All white people are racist," he allegedly said.

He apparently got Server 1 to start doing her job, but she asked in a "sarcastic and insincere tone about whether they wanted more drinks."

Finally, the complaint says the same location had signs up proclaiming "Ghetto Specials" were available. An attorney for the group, Mark Potashnick, says he isn't sure what the "Ghetto Special" was and Daily RFT can't find any evidence online that this was ever an official, Hotshots-sanctioned offering.

Potashnick says his clients complained to Hotshots corporate office and got the brush-off. They also filed a complaint with the Missouri Commission on Human Rights, which did its own investigation and concluded on December 6th that all six plaintiffs have the right to sue for discrimination. Potashnick says he's handled discrimination cases that take place at restaurants before, but this one's a little different.

"Usually it's from the perspective of African-American employees that have to work alongside with waiters, waitresses, bartenders, who say things like, 'I'm not waiting on black people, they don't tip,'" he says. "It's more rare that the customers can get the evidence of what's really going on."

We left a message with Hotshots's corporate office and have yet to hear back.