Should We Raise Local Taxes to Spruce Up the Arch Grounds? We Don't Own the Property! 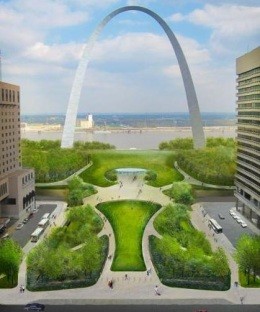 The city and surrounding counties don't own the Arch grounds. The federal government does. It's a national memorial and park run by the National Park Service.

So why should WE raise our own local taxes to revitalize that property?

That's the multi-million dollar question asked by critics of Board Bill 258, which was proposed last Friday by Seventh Ward Alderwoman Phyllis Young. She wants to put the idea to city voters.

Patty Rooney, a regional spokeswoman for the NPS, tells Daily RFT that she isn't aware of any state or municipality implementing a sales tax increase specifically to benefit a project within NPS property. Says she:  "This would be a rare occasion if this were to happen."


Young's measure, if approved by voters, would hike up the city's sales tax on everything except food and prescription drugs by three-sixteenths of one cent. That means, in real life, that if you paid ten bucks for a twelve-pack of beer, this new "Arch tax" would force you to fork over not quite two cents more.

It would quickly add up, though. The Beacon reports that there are similar measures being floated in St. Louis County and St. Charles County. All together, they would pull in some $38 million a year, with 40 percent going to local parks, and the rest split between Great Rivers Greenway and CityArchRiver (meaning each would get $11.4 million).

The current revitalization of the Arch grounds is happening under aegis of CityArchRiver. Per its own website, CityArchRiver is a "public-private partnership" consisting of the NPS, MoDOT, Great Rivers Greenway, the city, the Bi-State Development Agency, and other groups.

So right there, it looks as if both local and federal money is going toward the revitalization.

But Twenty-Fourth Ward Alderman Scott Ogilvie is opposed to Young's idea for an Arch tax. He was recently quoted as saying that a conversation ought be had on "whether we should increase taxes locally to fund something that we don't own."

Likewise, St. Charles County Executive Steve Ehlmann told KMOX that he is "questioning" why local taxpayers should foot the bill to maintain and spruce up a federal monument.

Patty Rooney, the NPS spokeswoman in our region, says there are fifty states with many different laws, but if our region is any indication, the raising of city or county tax specifically to improve NPS property is "pretty rare."

In addition, she says, it gives local taxpayers no extra say in the revitalization process. She told us that even if the city and surrounding counties were able to raise a bunch of tax money to redevelop the Arch Grounds:


That would not gain the contributing entity any more say in the project than anyone else. If an entity walked up to one of our parks and said, 'We'll give you $100,000 if you build it this way,' it's not going to happen. We have processes that must happen by law and regulation.

Of course, that doesn't mean the federal government decides all of us this for us; there's been some opportunity for local-level input. It just means that raising extra tax revenue won't buy us any more influence. (Or a critic might say, we're raising all this extra money to improve NPS property without any extra ability to manage it).

We've put in a call into Alderwoman Young to hear her thoughts on this matter.