Love Unleashed: Making Sure Your Pet Doesn't Accidentally Strangle Itself

On June 15, Meghan Heeter dropped Pi, her three-year-old Brussels Griffon, off at the groomer for a haircut. Looking back now, Heeter believes Pi was especially apprehensive that day.

After Heeter left, the groomer secured Pi in an empty bathtub with a restraint that fit around her neck like a noose. The groomer walked away to attend to another dog. Pi tried to jump out of the bathtub. The restraint tightened around her neck and strangled her to death.

"We were absolutely devastated," Heeter recalls. "But one thing we've learned through it all is that it can happen anywhere."

Heeter, who works at the PR firm Common Ground, and her husband Mike decided the best thing they could do was to raise awareness of the danger of leaving restrained pets unattended. This week they launched Love Unleashed, a website and Facebook page.

After Pi's death, Heeter began talking to friends and family and vets and animal experts about what had happened. "We head lots of stories of similar tragedies," she says. "For example, we heard a story from a friend about a dog that was left unattended on a lead on the back deck. It did what dogs do and tried to run after a squirrel or something and jumped off the deck."

It's not just limited to small dogs, like Pi. A vet told Heeter a story about a German shepherd who was killed trying to jump a fence while on a lead.

Heeter declines to name the groomer whose neglect led to Pi's death. "She's been through enough," she says. "She was devastated. She never intended to hurt the dog. I felt for her. At the same time, she made a bad mistake. But this is bigger than one groomer." 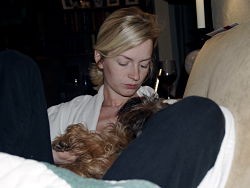 So instead of seeking revenge, the Heeters decided to raise awareness. In addition to the website and Facebook page, they're working on a brochure which they plan to distribute to pet organizations, groomers and the Humane Society.

Through her research, Heeter learned that here are no universal standards for pet groomers; those vary from state to state and are rarely enforced anyway. The best thing they could do, Heeter says, is to make sure as many people as possible know how dangerous it is to leave a pet alone while it's attached to a leash or a chain or a groomer's restraint.

"It's not something most people think about," she says. "People should talk to their groomers."

Meanwhile, the Heeters are still trying to adjust to life without Pi. They have a second dog, a Wheaten terrier named Badger, but they miss Pi's spunk and sense of mischief. "Our dogs are like our family," Heeter says. "Our number-one goal is to get people to share this story and think twice before putting their dog on a lead."