Yes, the County Has Made a Dent in Youth Heroin Deaths. But Work Remains 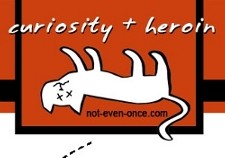 In 2011, as heroin deaths surged in St. Louis County, folks from the National Council on Alcoholism and Drug Abuse non-profit teamed up with state officials and county law enforcers to launch the "Not Even Once" campaign.

The point was to let young people know -- through speeches, moive and bus ads and radio spots -- that you can't just casually try heroin. It's not like pot or beer. You'll get severely addicted. Then you're screwed.

The effort appears to have made a dent. St. Louis County Police spokesman Randy Vaughn tells Daily RFT that only six young adults (defined as those aged 18-24 years) have fatally ODed on heroin so far this year, compared to 19 last year.

And that's significant, because in 2011, young adults were the hardest-hit group. There were a total of 91 heroin deaths last year, while so far in 2012, that death toll is down by 30 percent, Vaughn says.

In fact, this Thursday, the Not-Even-Once campaign will get a national award in our nation's capital.

President Obama's Drug Czar, Gil Kerlikowske of the Office of National Drug Control Policy, will present the "Outstanding Community Prevention Effort Award" to the campaign's leaders. County police chief, Tim Fitch, will be there, along with County Executive Charlie Dooley.

However, there's one thing we at Daily RFT would like to point out. A glance at the campaign's website reveals that it's obviously geared toward young people; the advice on the "Help Me Say No" page sounds a lot like the stuff I used to hear in D.A.R.E. class back in the late 80s.

That's good; it's best to nip the problem in the bud.

However, Colonel Fitch has told the AP that the average age of heroin over-dosers this year was in the 40-45-year-old range.

While the biggest age-group hit in 2011 was the 18-24-year-old set, all it takes is simple logic and math to figure out that most of the deaths were people who are older than 24.

You could argue that those older folks should know better than to taste smack.

So we wouldn't mind seeing a campaign to educate those older folks too, in a way that's more specifically geared toward them. They won't hear the speeches if the speeches happen in high schools.