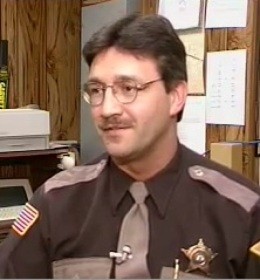 That's an absurd sentence, chronologically, but it does indicate how badly society likes to punish dirty law enforcers - especially those who deal drugs and try to have witnesses killed.

Martin was originally convicted by a jury in September 2010. At trial, witnesses had said that Martin took marijuana out of the evidence locker in the Gallatin County Sheriff's office and gave it to a drug dealer. In all, he supplied dozens of pounds to the dealer.

When the dealer grew reluctant to continue on two occasions, Sheriff Martin pulled out his gun and threatened to take the dealer out.

The dealer arranged with the feds to tape their conversations -- probably necessary when it's a dealer's word against a sheriff's.

Even after being arrested, Martin tried to arrange from jail the murder of two witnesses who were going to testify against him.

Martin was first sentenced in January 2011, to two life terms plus ten years. He appealed, and the appeals court upheld the conviction, but nullified his sentence because an error was made in calculating his sentence.

On Friday, the Court heard new evidence that while awaiting re-sentencing this time around, Martin had smuggled some prescription medicine into Williamson County Jail, where he was being held. The federal judge decided to reimpose the original sentence.