Belleville Man's Ashes To Be Scattered On James Dean's Grave 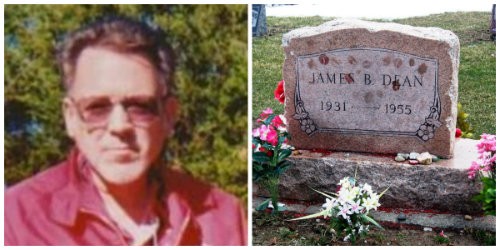 We here at Daily RFT are a teensy bit obsessed with this item that appeared in the Belleville News-Democrat over the weekend.

Whether the people in his life knew of this ahead of time is unclear, but it makes one thing crystal -- Vodde was very possibly the world's biggest James Dean fan.

According to columnist Wally Spiers, Vodde was something of a downtown fixture, having worked as a parking control officer for over 30 years. No doubt that entailed a lot of fighting with irate illegal parkers and sometimes being an unpopular rule enforcer. 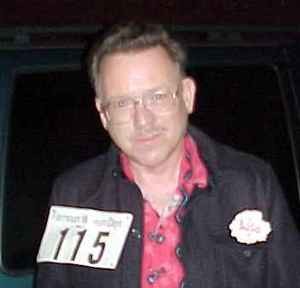 But back at home, Vodde celebrated the most legendary scofflaw of them all: James Dean, the rebel without a cause. Vodde left behind Dean memorabilia of all sorts, even had himself superimposed into photos that made it appears as if he and Jimmy were buddies. Spiers writes that he made a pilgrimage to Fairmount every year for a festival commemorating Dean's death. Vodde even thought he had a likeness to the late, great actor, entering lookalike contests at an age the real Dean never reached.

But Vodde's final act as a superfan will clearly be his greatest. In his will Vodde stipulated that he be cremated and his ashes spread on Dean's grave. Only, we like the way Spiers said it in his column:

He asked that he be cremated and that his ashes be scattered on Dean's grave in Park Cemetery in Fairmount, which apparently is OK with everyone.

We did a quick Google search and couldn't find evidence that anyone else has done this. Stephen Vodde and James Dean -- together forever.