We've been relying on other people's pictures and videos of the restored Central Branch of the St. Louis Public Library for the past few months, but yesterday we finally got to chance to take our own. You can do the same this Sunday, December 9.

The renovation of Cass Gilbert's hundred-year-old building (yes, the same Cass Gilbert who designed the Saint Louis Art Museum) took two-and-a-half years and cost $70 million. "It was important to get it right," says Waller McGuire, the library's executive director. "People throughout the world will be looking at it."

Paul Shaughnessy, the president of BSI Constructors, the general contractor responsible for the project, described the experience as similar to building a ship in a bottle. Tons and tons of building materials, mostly steel, had to enter the building through existing openings and then assembled inside, all without damaging the existing granite walls or marble floors.

There was also a good bit of cleaning involved.

Well, actually, those are low-heat LED lights. You can find them all over the library; these are in the first-floor Science and Technology Room, also known as the "How To" Room. But still. Four million items -- not just books, but also 20,000 CDs, 5,000 DVDs, 150,000 maps and sundry other things -- had to be moved out of the library into storage and then back in. The revamped library has 83 percent more public space than it did before. This is what architect George Z. Nikolajevich of Cannon Design did to the old stacks:

It's an atrium now, with a computer lab, cafe and, naturally, bookshelves.

The frosted glass panels that made up the floors of the old stacks are gone -- they were, says McGuire, "a marvel of the twentieth century and a fire and seismic nightmare of the twenty-first" -- but one has been preserved in the atrium's information desk. The old periodical room is also gone -- you can find local newspapers in magazines in the St. Louis Room and other periodicals in the same room as books on similar topics -- as is the Popular Library. Instead there's the Center for the Reader, which keeps all the most popular titles in one place.

In the next room, The Creative Experience, there are four collaborative pods. Barbara Knotts, the library's electronic collections manager, demonstrates how several people can plug in their laptops at once and then display images on the big screen and swap files via the touchscreen on the table. If you don't have a laptop of your own, the library will lend you a MacBook. Or an iPad, if you prefer.

There's also a recording studio, which isn't quite done yet. Several hundred miles of fiber optic cable have been threaded behind the existing walls to cover the entire building in WiFi signals. And there's an XBox 360 in the brand-new Teen Room.

And, finally, the old coal bin (which was so vast, it had to be navigated by miner cart) is now an auditorium with seating for 250:

Special collections, genealogy, history and travel have been moved up to space on the third floor that used to be staff offices. The genealogy room is the only room in the library where the library's creed of free access for all starts to break down. Genealogists, explains Pepi Parshall, the library's volunteer services coordinator, are obsessives and tend to "tunnel" and wander off, leaving their stuff behind. Hence, there was noticeably more theft in the old genealogy room than in the rest of the library. Now visitors have to be buzzed in. Art projects will now be allowed in the Children's Room, because there's a sink so the kiddies can clean up.

Someone has devised a new way of keeping kids quiet: These black...things are soundproof.

The Children's Room is closely guarded by three jelly-men and bears this warning over the door: "Hey grown-ups, only kids allowed past this point unless they bring you with them."

The restoration also cleaned up some of the library's best architectural features, such as the info desk in the Great Hall, where a century's worth of patrons had to go to request materials from the stacks and, in the process, nearly wore through the marble floor:

Two fireplaces, including this one in what's now the Teen Room. (The other is in the Stedman Room, the architectural library.) They worked back in 1912. They don't anymore:

The figures on top of the grill in front of the library's front door (they're owls sitting on lamps, two symbols of wisdom for the price of one): 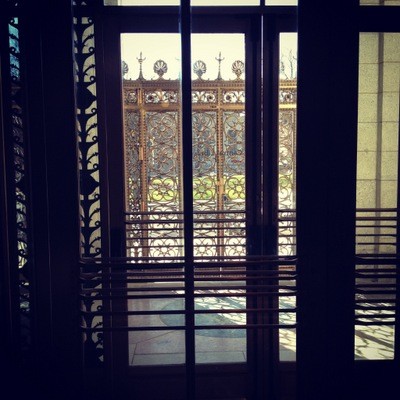 All the overhead lighting in the second-floor reading rooms has been replaced. In some rooms, fluorescent lighting had been installed in the 1950s. It was bright, but also ugly. In other rooms, nobody had bothered to use bulbs that were actually compatible with the lamps or replace them when they burned out. These chandeliers, which hang in the Fine Arts Room, are a facsimile of the originals from 1912.

The bathrooms, probably to the surprise of no one, were not deemed worthy of saving and have been completely replaced. The very best part of the restored library, though, might be the ceilings.

Entry hall. All the portraits on the ceiling are of important figures in the history of book publishing. This is Aldus Manutius, who invented the portable book.

The Fine Arts Room, after Michelangelo. During the restoration, local artists repainted it by hand.

The Center for the Reader. All quotes were suggested by St. Louis readers, as were the book and movie titles engraved on the steel canopy over the Locust Street entrance.