Mysterious Discovery in Sauget Sounds Like Beginning of a Crime Novel 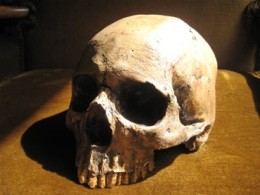 Sauget has a lot of decent, hard-working citizens, but -- let's be honest -- there's also a lot of shady stuff that happens in and around the late-night strip clubs right there on Illinois Route 3.

In that context, consider the following.

On Monday afternoon, a hunter called the Sauget police. Just south of the clubs, near a waste-water treatment facility off American Bottom Road, he'd found a human skull.

Police arrived, and came to notice a small hole in the back of the skull.

Police later found the rest of the skeletal remains not far off, and a pair of extra-large blue sweat pants with five Russian coins inside.

Five Russian coins? What the what?

A Sauget detective has told the Belleville News-Democrat that the police are having the skull tested and looked at by an anthropologist, but the body has apparently been decomposing for two years.

If you think you know something that would be useful to the investigation, you can call Sauget police at 332-6500.